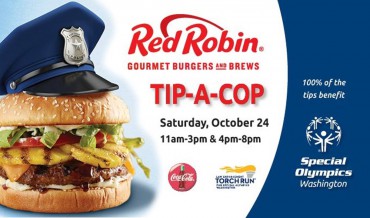 There are new servers in town — at least on one very special day. Ever dreamt of giving an order to a cop and not getting a ticket? Well, for that one day only, guests at a local restaurant can do just that — all for a great cause.

Kitsap County Sheriff’s Office personnel, together with officers from other local law-enforcement agencies, will again trade their handcuffs for aprons and join up with Red Robin Gourmet Burgers, Inc. as part of a nationwide effort to raise funds for programs under the auspices of Special Olympics.

Events like Tip-A-Cop help provide these programs at no cost to the athletes. Special Olympics Washington’s goal for this endeavor is to raise $125,000 statewide. In less than 10 years, Tip-A-Cop events at Red Robin restaurants across the country have raised more than $2.7 million to support both Special Olympics and the mission of inclusion and acceptance for people with intellectual disabilities.

Tip-A-cop is part of the annual Law Enforcement Torch Run (LETR) campaign in support of Special Olympics. LETR, which includes an international series of relay runs and special events such as Tip-A-Cop, is supported by more than 100,000 law-enforcement officers worldwide who help raise money and public awareness for Special Olympics.

As the largest grassroots fundraiser and public awareness vehicle for Special Olympics, LETR funds raised go directly to local programs in states or countries where the funds are generated.