Meeting of the Minds Leads to Dream Home 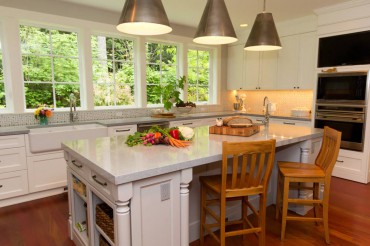 Upon purchasing their Bainbridge Island home in 2012, Renie and Mike Wilson had mixed emotions. On one hand, they recognized the many fine qualities of the place. The setting was lovely. The architecture was attractive. The floor plan was good and the size perfect.

However, the house had a dark side; namely, the kitchen. Visiting the kitchen was like a trip to the crypt. In addition, the entryway was a narrow tunnel, and the home’s flooring and overall color palette was a jumble.

Even worse, the two sides of the house felt disconnected. No doubt about it, the Wilsons needed help.

“The day we viewed it, I stood in the kitchen and saw the potential,” recalls Renie Wilson. “I knew this was the one, but it was going to be a project. It was like 1973 in here.”

Wilson was no stranger to home makeovers. Her husband’s job in the banking industry has meant moves across the country and back throughout their long marriage. The frequent relocations had taught the couple many things — among them the value of a talented and intuitive interior designer.

Finding the right decorator for their island home began slowly with one false start and months of searching. Then Wilson interviewed Michelle Burgess of Michelle Burgess Design of Bainbridge, and soon, magic happened. 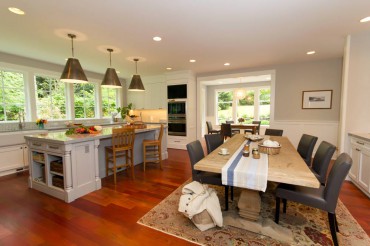 Wilson recognized that Burgess had not only an eye for detail, but for the bigger picture as well — a result of Burgess’ experience working for an architectural firm. Even more important, she worked at an empathic level, reflecting the homeowners’ sensibilities rather than her own.

From the beginning, the project was a collaboration between Burgess and Wilson from which the designer coaxed the homeowners’ deepest feelings of home and comfort.

“I don’t work to a formula,” Burgess says. “I don’t want to repeat what I’ve done before. It’s a matter of getting to know the client, drawing them out. You have to be flexible because you never know where you’re going to end up.” 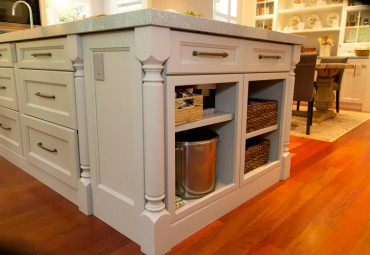 In addition to Burgess’ architectural eye and fine arts background, her approach reflects her degree in ethnomusicology, which lends her designs an anthropological element. In practical terms, this means attention to the character of the client, their environmental preferences and social relations.

At first, the focus was a kitchen that she describes as “dysfunctional.” Roomy, but chopped to pieces by a pantry and filled with dark cabinetry, the kitchen needed to lighten up. It also needed the storage and counter space to facilitate Wilson’s passion for cooking, baking and canning. 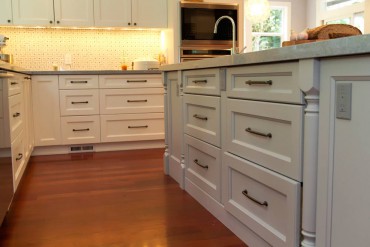 Under Burgess’ guidance, the project centered, as strange as it sounds, on a pot — a big, stainless steel stockpot that set not only the color scheme but the size and scale of the kitchen as well. The muted silver of the pot was recast as shades of gray — a palette that eventually extended throughout the house. The stockpot’s size gave birth to a titanic, 4-by-9-foot island that can handle even the largest piece of culinary equipment.

The breadth of the island called for correspondingly overscaled pendant lights. When the giant can lights arrived, Wilson unpacked the first one with an exclamation of surprise. Certainly, three of these monsters would never fit, she recalls thinking. 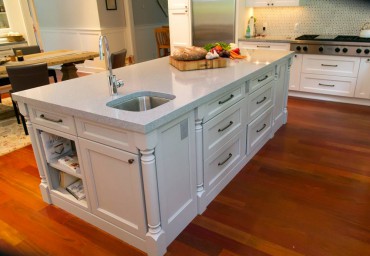 But trusting in Burgess’ assurances that proportion is crucial, Wilson allowed the antique nickel lights to be installed — and overhead perfection was achieved.

Burgess explains that the ceiling, or — in designer parlance — the “lid,” is often overlooked. “It’s the part of a room most often unattended to,” she says. “If it feels like something’s missing, look up.”

As the kitchen island progressed, the pantry was removed to open the room. White cabinetry and a run of five tall windows brought in and magnified natural light. 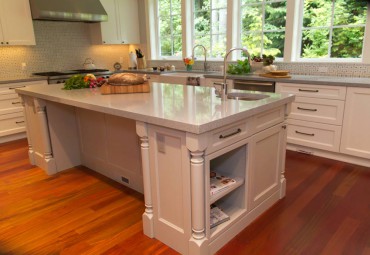 In a bit of backsplash serendipity, the first choice of tile arrived broken. There was no time to reorder from the same company since the job was scheduled to finish in time for a family Thanksgiving. So Burgess turned to another, speedier source. The result was a stunning yet understated basketweave pattern of stone mosaic.

In lieu of a formal dining room, the Wilsons opted for two eating spaces, both adjoining the kitchen. The breakfast nook looks out to the new back deck: an amply proportioned improvement over the original deck. 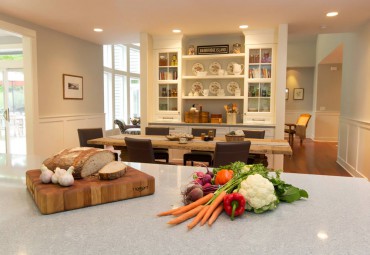 The nook also looks to its “lid” with a pretty capiz-shell, bouquet-style pendant. The second dining area runs parallel to the kitchen island and comfortably holds a rustic, 10-person table. This combined dining room and kitchen concludes with a custom-built hutch with display cabinets filled by cookbooks, vintage dinnerware and jars of Wilson’s gourmet canned jam and produce.

The Wilsons were so pleased with the kitchen that they decided to complete the home’s renovation immediately, instead of over the next few years as originally planned. This suited Burgess’ method of thinking architecturally, considering the interior as a unified piece, rather than each room individually. 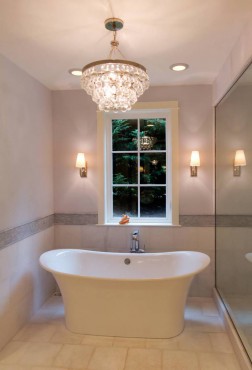 An example of the whole-house concept is the paint palette. Various shades of pearl gray — some with subtle undertones of blue or red — are found throughout the house. Far from being dreary, the gray and white of the walls, wainscoting and trim imbue the home with a light, casual air that slides toward elegant. Burgess jokes that, to circumvent the knee-jerk reaction of Northwesterners to the color as being somber, she should come up with a different word for “gray.” 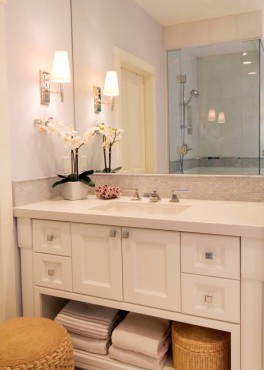 The house also needed a contractor to bring some architectural logic to the layout. For these changes, the Wilsons relied on Smallwood Design and Construction of Bainbridge Island, with special appreciation to project coordinator Denise Linrothe and site manager Chuck Haddock.

The team moved walls, opened the narrow entryway, raised ceilings back to their original height, and lengthened and trimmed doorways. Cohesive trim packages, house wide Brazilian cherry flooring and some structural tweaking brought the visually disconnected master suite wing back into the fold. 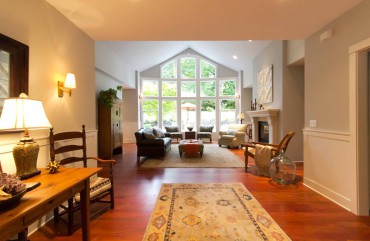 Astonishingly, for the amount of work done, the remodel was completed in only three months. Burgess reflects that, at one point as the painters, carpenters, floor layers and electricians swarmed, “every single subcontractor in the universe was here.” In the end, the chaos paid off. Movers brought in the Wilsons’ furniture. Wilson turned on the stove. The family arrived and Thanksgiving dinner was served on time, in the couple’s just-completed home.

After three years in a home Wilson describes as “a place that suits us; it just feels like our place,” her husband was transferred back to the Midwest. Although sad at leaving her place behind, Renie Wilson has one consolation: Burgess will travel to Iowa to design the couple’s new interior, putting heart and soul to their next home.