The Paradise Garden of Jim and Sharon Moore 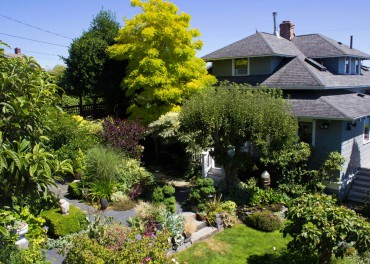 Jim and Sharon Moore of Kingston are only the third owners of a charming historic home built in 1909. The Moores have lived in their home since 1975 and Jim is known to many locals as their favorite veterinarian. The Moore family also hosted foreign exchange students through Rotary for more than 20 years.

But that’s not today’s story. This story is about a tropical paradise in a magnificent, sunken garden.

In 2004, the Moores needed to remove a very old garage sitting atop an equally old and large cement foundation. In its place is a brand new garage, a workshop and an apartment originally inhabited by their daughter. The demolition and ensuing construction provided the perfect opportunity to create new gardens and landscaping. They modestly claim they know nothing about plants but that’s not exactly true — the Moores do love to enjoy and bring home plants. 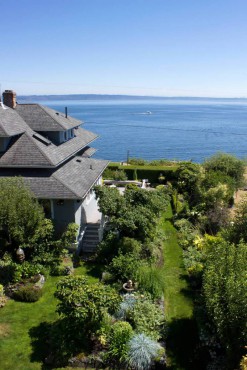 Shayne Chandler is the couple’s favorite “adopted son.” They all met through Heronswood and Dan Hinkley.

During any visit with the Moores and Chandler, it’s obvious how fond they are of one another. They are all self-professed plant geeks.

So the first thing the Moores did was call on Chandler to design, renovate and install their new landscaping. Chandler has spent nearly 20 years as a full-time landscape designer. His studies were in art and design and he admits his true love has almost always been plants.

When he’s not designing and constructing landscapes for clients, he’s growing plants to sell at the Port Gamble S’klallam Heronswood garden open days. His own lush garden is open by appointment several times a year.

Several of the gardens Chandler has designed have been featured on Garden Conservancy Open Days on Bainbridge Island, in the Seattle area and on the Kitsap Peninsula. The Moores’ garden was on the tour last year. 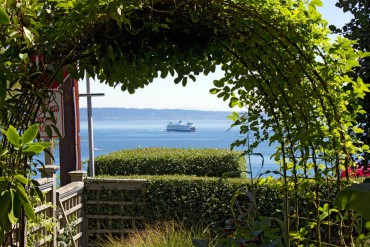 Chandler utilized the abundant concrete walls left from the old foundation and contracted with a Hollywood set designer to create several iron trellises, a gate and fence. A stucco wall was created, plants were moved around and garden rooms took shape.

Trees are an integral part of the rooms’ anchoring, shading and protecting some of the plantings. Hardscaping and plantscaping using varied materials created walls to surround the whole property. Planting areas combined myriad plants from bulbs to tall trees. Included were areas to pause and shelter from weather since the Moores’ home sits atop a high, often windy bluff.

Existing fruit trees, roses, rhodies and other plants already in the garden were woven into the design. Some were even moved into new locations on the property. 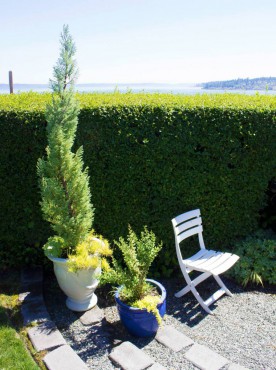 Street access to the gardens and home is from two areas. A formal entry flanked by two stone columns is bathed in full sun. From the garage area, concrete paths and stairs lead to several landings and walkways running up to the back entry of the home. 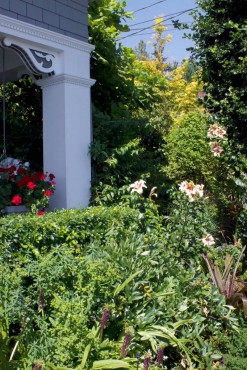 All the garden rooms are either splashed with sun or dappled with shade. A few areas are in deep shade. Focal points include Japanese maples, roses and vines climbing up an iron trellis or clambering over trees and shrubs to add blooming successions.

Several water features provide peaceful whispers in the background. Raised planting areas climb up one wall. Containerized plantings are tucked here and there throughout the meandering garden rooms. Every bit of the property is surrounded by walls, fences, living shrub hedges, decorative trellising and plants galore.

Woody plants form the bones of the gardens throughout. Abundant trees and shrubs provide framework. A gorgeous Styrax japonica holds center stage in one area. 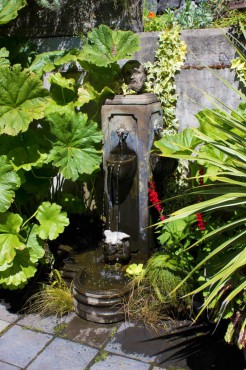 Every type of hardy tropical plant (native to the Mediterranean, South America, China and other temperate areas) is combined cleverly and artfully among Northwest natives and cultivars. Nearly every tropical plant is cold-hardy in this region. 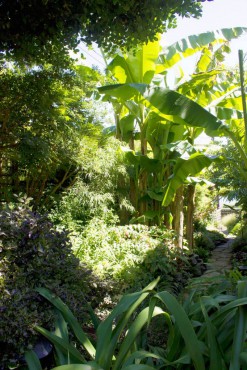 Plants that could be marginal in a typical winter here are containerized. That creates ease of moving to protection in the plant storage and potting area that was planned and constructed into the newer building.

The plants were chosen for sweeps of color. Heights vary widely and range in size from minute to magnificent. Foliage provides textural interest and an ever-changing panorama of enjoyment. Fragrance is also important and many plants provide that. Amazingly, nearly all the plants, even though abundantly lush and luxurious to behold, are mostly easy-care. 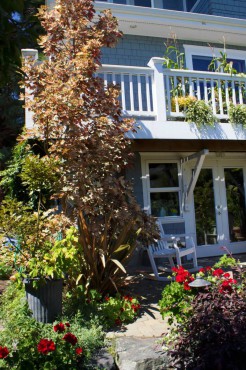 The gardens are mulched with garden compost in late winter. Fertilizer is rarely required and plants are selected to thrive in the growing conditions of the site. Irrigation is installed so plants receive proper watering. Some hand-watering is also done.

However, there is a grouping of banana plants that do get fertilizer. Jim uses a liquid lawn fertilizer regularly during the growing season, and they receive a mulching of well-composted horse manure each spring. 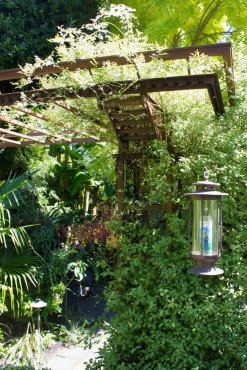 The bananas are also cocooned by wrapping them in colorful and decorative fleece blankets for protection during the soggy, cooler winter months. Each year, the banana trees produce huge, appealing blooms followed by clusters of fruit.

In addition to pruning the hedges, Jim has become an avid bonsai collector. He meticulously trims and trains the plants in his collection. Some of his bonsai include: Korean hornbeam, Pittosporum tenufoliam ‘Silver Ruffles’ (black stems and crinkly leaves) and Boxus microphylla ‘Kingsville dwarf.’

“His bonsai collection is expanding throughout the garden and decks,” Sharon says. 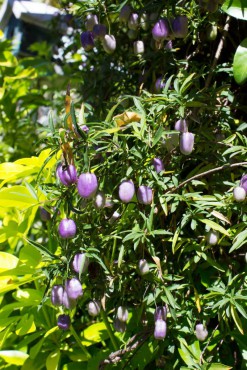 Perhaps Jim’s bonsai collecting springs from a need to keep adding plants. Bonsai tend to have smaller space requirements. Both Shayne and Jim point out that Sharon, too, periodically brings plants home. All three love plants and can’t resist some new temptation.

The garden is ever so resplendent with perhaps thousands of plants. It’s a dream garden.

A Small Sampling
of the Plants

He says he has the best job ever.

“It has been a very rewarding career being able to work with art and nature to create beautiful spaces that bring joy for others,” he says.

As the garden has grown and plants have matured, some spaces open up, just crying out for some plant additions. The Moores have a theory though that “impulse is great until reality sets in.” Their motto is, “Let’s call Shayne first.”

The gardens are continually evolving. These three dedicated and enthusiastic gardeners have created their own piece of paradise. It’s the closest thing a person can come to heaven on Earth.