In 2005, Hansville Master Gardeners Roland Malan, Susan Harrington and Sheri Kiley, along with landscape architects Mary Booth and Patrick Leuner, met with county parks staff and presented a plan to steward and beautify a very neglected, weed-infested, abandoned motocross dirt bike track into a native plant garden for all visitors to enjoy. The plan was to demonstrate how easily native plants can be utilized and incorporated into a beautifully landscaped area. 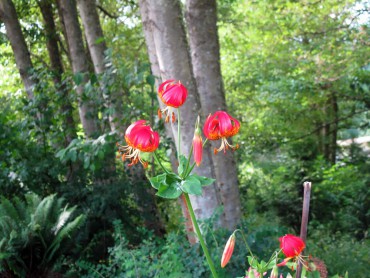 They’ve grown to at least 25 equally dedicated and committed volunteers. They’ve formed a board and funding team called the Buck Lake Native Plant Garden Association (BLNPG). They go after and receive grants and donations and work diligently planning, planting, weeding, tending and educating. A visit to the site shows how appealing a garden filled with native plants can be.

Volunteers can be found at the garden on the first and third Mondays from 9 a.m. to noon during the months of April through October. Special work parties occur as needed. Plants in the garden must be natives from the western regions of Washington, Oregon and British Columbia. Sometimes even from Northwest California. 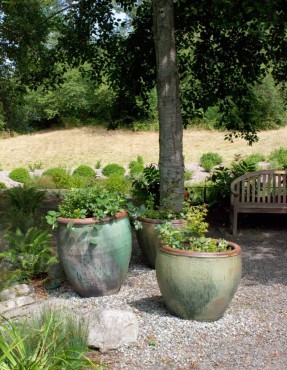 Booth and Leuner created the landscape plan and plant lists for the first stage of the garden. Both brought extensive backgrounds in the field of designing with native plants. They monitored and directed nearly all stages of the work and still continue to be the go-to sources for answers.

Donations poured in to do the initial contouring and earth moving, along with creating pathways. Soil amendments and mulches were brought in and areas that weren’t yet ready to be planted in the first year received a planting of crimson clover to hold soil in place, nourish the soil and add tilth until those areas could be planted in succeeding years. An irrigation system was also added.

The first plants installed were birches, vine maples, red flowering currant and snowberry bushes. Paths were established and the sculpting included creating berms and garden rooms. The total area was an acre and a bit more. 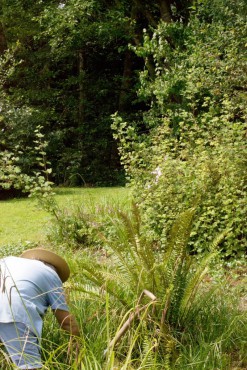 The Buck Lake Native Plant Garden would become a place of learning and growing. One of the goals was to have a place for students (from grade school through colleges and universities), Master Gardeners, gardening enthusiasts and others to study and learn about native plants. It was also a place to try different varieties of plants to see how well they’d do in West Sound gardens.

Plants are found and purchased from a wide variety of resources. Some of them include: Heronswood’s numerous vendors at the open garden events, Kitsap Conservation District, John Scheepers catalogue, neighboring Conservation District sales and local growers in West Sound. Volunteers even dig up, divide and donate favorite native plants from their own gardens.

Plants to try out are usually purchased in 4-inch pots and then planted in different areas. If a plant is successful in getting established, they then purchase more. Plants are also selected for color palettes of blooms and blooming time. Others are selected strictly for their foliage attributes. Some plants satisfy all criteria — color, texture, hardiness, ease of maintaining and overall interest. 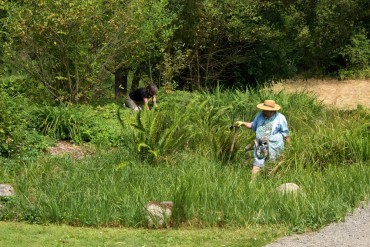 Near the memorial garden, several large, all-weather ceramic containers were planted with native plants, especially suited to spending several years containerized. They demonstrate how native plants can be combined for small-space gardening.

Garden rooms show how plants can be grouped for partial shade, full sun, borders, hedging, vining and a host of other situations.

The most recent undertaking was a dry streambed to channel water runoff into a rain garden during the monsoon seasons in West Sound. Another area planted into a lawn shows how those who just can’t live without a lawn to mow can still incorporate native plantings around it. Soon, espaliered woody native plants will be growing along the split rail fencing that borders one edge of the gardens. 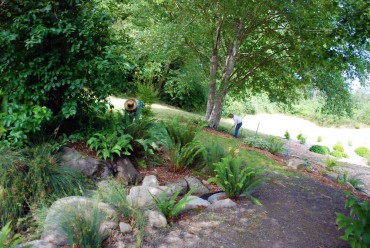 Details on a Few Plants

On a visit in early July, a tall, gorgeous grouping of deep-orange leopard lily (Lilium pardalinum giganteum) was blooming in profusion. Each blossom has golden-yellow centers with maroon-black spots.

The lilies took three years to become established. The volunteers admit they’ve learned to be patient while waiting for native plants to establish. Right next to the leopard lilies is a shorter pink lily called Lillium parvurn ‘holiday’ and on the other side of these lilies is pink blooming monkey flowers (Mimulus). 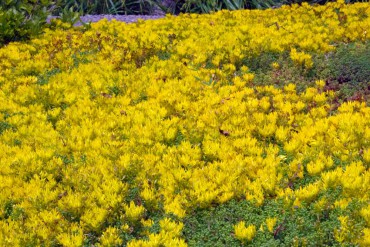 Booth shares the secret of how to grow bunchberry (Cornus unalaschkensis), a trailing, woody groundcover. This particular groundcover is hard to establish. In order to give it a good place to get going, dig out a trench and either fill the trench with rotting wood chips or place a rotting log and then add soil on top at the time of planting the bunchberries. Or hollow out a trench in an old, decaying log, add some soil and plant the bunchberries.

The relationship between the rotting wood and the bunchberry plants is the key to good establishment. This lovely, shiny, dark-green, trailing rhizomatous groundcover has white, dogwood-shaped flowers and red berries. 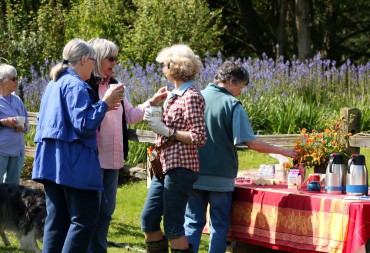 Sedums have been a very successful addition to several of the berms. Sedum oreganum with dark green foliage, Sedum spathifolium (with gray green foliage) and Sedum oreganum ‘Tenue,’ which currently covers a large section of one berm, serve well as groundcovers. Cheerful, deep-yellow flowers are held aloft on stems.

Nearby on the same hillside with Sedum oreganum ‘Tenue’ are groupings of Tolmeia menziesii ‘Taffs Gold’ and Penstemon cardwellii ‘John Basher,’ a low-growing groundcover penstemon with deep-blue blooms.

One large berm near the entrance to the gardens is completely planted with camassia and iris in a wide variety of cultivars. Those visiting in spring will be astonished by the sea of blue, white and yellow held aloft on a carpet of green. Their heights vary and the bulbs and rhizomes flower at different times so there’s interest for several months. 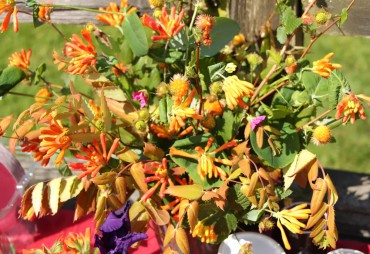 It should be noted that the hundreds of plants selected in the gardens include numerous bulbs, abundant evergreens, ground covers, grasses, ferns, shrubs, trees and vines. Berries such as West Sound native huckleberries (both deciduous and evergreen), thimbleberry and salmonberry abound around the edges, along with numerous other native plants familiar to those living in this area. But how they’ve been incorporated into the designs provides new ideas for gardeners.

The group has been working together for nearly a decade. Very few volunteers have moved on to other things. Each member has strengths that are appreciated and honored by the other volunteers. As the garden has grown and expanded, they’ve learned what works best and what doesn’t. They generously share what they’ve learned with visitors, fellow gardeners, members of the community and each other. 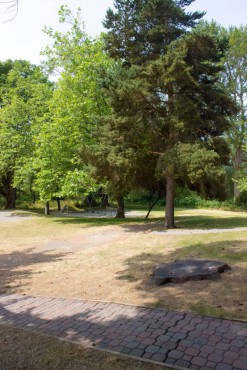 Most of the native plants are labeled with both common and botanical names and general care instructions. In the future, they plan to have informational brochures on site and include a complete plant list, with photos, on the website.

At 10:30 a.m. each work-party day, volunteers gather around a refreshment table with a native plant bouquet holding center stage. Booth, Leuner or others take time to explain about the plants in the bouquet and about the other natives chosen for learning that day.

A memorial garden room was established to honor Hansville gardeners from Flotsam and Jetsam and other community members who have passed away. On a recent work-party day, Jim Stemen was meticulously cleaning and painting the faded names embedded in the memorial tiles in this shaded, serene area of the garden. Flotsam and Jetsam members crafted the decorative rebar fencing that edges one side of the memorial garden.

The Buck Lake Native Plant Garden volunteers are very cheerful and welcoming. They encourage everyone to come for a visit or join them for work parties.

“You don’t need to have any experience with native plants or plants at all,” Kiley said.

“We really want people to know that students and anyone interested in learning about horticulture and the environment is welcome to come work side by side with us,” added Ed Gronseth, another volunteer. “One of our goals is to encourage and support aspiring environmentalists and horticulturists.”