Garden, Home and Art — Creating New Memories Out of Old 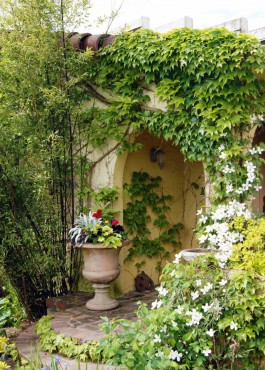 The story of Heather and Eric Andersen is an ever-changing tapestry of creating, renewing, sustaining, caring and loving. They’ve known each other since they met in an algebra class in high school. Gardening and plants have always been an underlying theme in their lives.

As children, neither liked gardening. But several years later, they made their living in landscape design and installation. 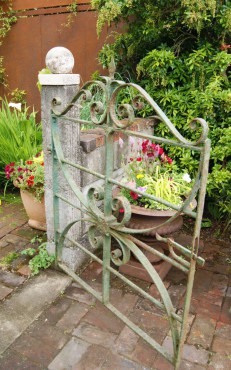 In their younger adult years, they felt they didn’t know much about plants. The couple owned the coffee shop at Green Heron Nursery in Poulsbo. The nursery was her parents’ business and the coffee shop was the Andersens’ business.

They became totally immersed in landscaping and plants though. They actually installed all the gardens at the nursery.

“We are all garden addicts,” says Eric Andersen, referring to their parents and to themselves. Eric and Heather even got married in the garden of Heather’s parents.

The Andersens have worked in a myriad of jobs. Both can build just about anything garden-related and are especially good at salvaging materials.

Refinishing and painting are also shared talents. Their garden is continuously evolving but hardscaping and structures tie it all together.

“We love to create and build something and then pack in the plants,” Andersen says.

The Andersens say they waited quite a while to purchase their first home. The one and only home they’ve owned so far, purchased 15 years ago, was designed and built by Harry Brandon. He had worked in construction on bungalows near Hearst Castle and later moved to Bremerton, where he wanted to “bring a little bit of Hollywood” to this region. Brandon built several Spanish-style homes on this peninsula and in Seattle.

The Andersens have surrounded the home with luscious gardens. The land is terraced and from the front looks out to East Bremerton in the far distance. When they purchased their home, there was no view but now it has a stellar view since a row of old, decayed and failing black locust trees were removed across the street.

A building inspector friend of the Andersens knew that Tim Ryan Construction was looking for a place to dispose of the bricks and Eric said, “We’ll take them.” The bricks were delivered to their backyard and took up a space 8 feet high by 8 feet wide and 20 feet long. 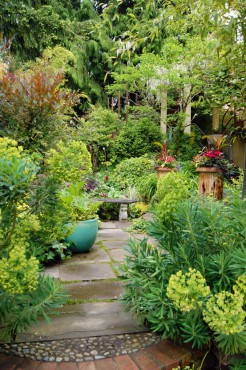 When they purchased their home, it was painted battleship gray and the land was overgrown and covered with grass hidden under blackberries, rampant vinca and St. John’s wort. There was no hardscaping at all.

Guess what they did with all those salvaged and cleaned-up bricks? Today the home is surrounded by various patios, paths and stairways leading to luxuriously planted areas. Fencing and trellising provide frameworks for wisteria and other beautiful vines. The front of their home is covered in a striking, climbing Boston ivy vine that comes into full, magnificent splendor each fall. 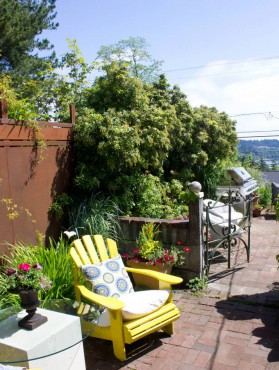 During the Andersens’ time owning and running the coffee shop at Green Heron Nursery, locals would stop in for their cuppas and conversations. After the nursery closed in the late ’90s, the Andersens sold their coffee-business equipment to Liberty Bay Books, where the regulars from the nursery and also bookstore customers stopped by for coffee and chatting. During this time, Heather’s artwork was often on display on the walls.

Working at the nursery and business skills gleaned from owning and running the coffee shop led to starting their own landscaping business. They designed, built, planted and installed gardens in Seattle neighborhoods, Bainbridge Island and throughout the rest of Kitsap County. Sadly, Eric’s body could not withstand the toll that this career takes on a person’s back. 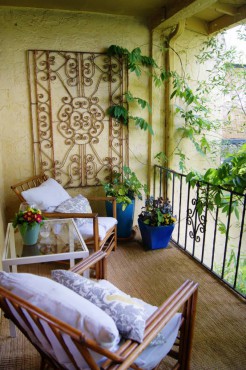 They still earn part of their living through interior and landscape design consultations but it is no longer their full-time business.

“The best thing we do is go and look at a place and see the possibilities,” Heather says. 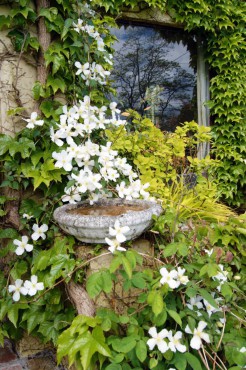 The advice aspect of their careers evolved from the landscapes they’d created. Their satisfied clients started asking them questions about their home’s interiors and designing those spaces began to grow too.

Their most recent and newest life’s work is consulting on dementia care and caregiving plans.

“We work mostly with the caregivers and the families,” Eric says.

Their own home in the past was renovated to serve the needs of the owner, a paraplegic who lived there until he passed away. The home’s bathroom was large and had a specially designed bathtub, toilet, sink and shower, with a lovely bedroom attached. 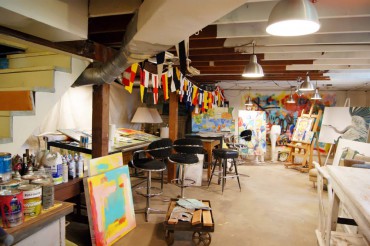 Several years later, the Andersens had not yet remodeled the bathroom but that was a very good thing because Heather’s grandmother, who had dementia, came to live with them and they became her full-time caregivers for the last two and a half years of her life.

Eric has been trained in dispute resolution and small-group facilitation. He and Heather wanted to share their caregiver journey with others to give them hope and peace. They wrote a book titled “Remember ‘I Can’t Remember.'”

They saw the need but were not sure how to get their story and information out to those who needed it most. They praise their friend, Casey Pratt, for becoming financially involved in publishing the book and in distributing free copies to senior-care centers and hospitals. The book can be purchased at Liberty Bay Books in Poulsbo and online through Amazon or through the Andersens’ website. 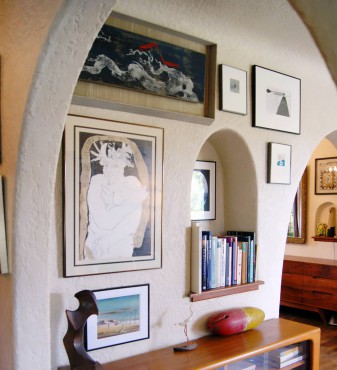 The Andersens truly appreciate things that others have given away or no longer need. They’ve always loved visiting thrift stores.

“It was something to do that often only cost pennies or nothing at all — 99 percent of our finds are from Goodwill and St. Vincent’s,” Heather says. “We are constantly refining and upgrading our style and furniture. When we are finished with a piece, we can usually find a happy home for it with a friend or family, thus we have furnished almost all of our families’ and a lot of our friends’ homes.”

They’ve always lived on very little money. Their home is furnished with hand-me-downs, garage sale finds or purchases from thrift stores. The couple share their philosophies of shoestring abundance on the blog of the same name. 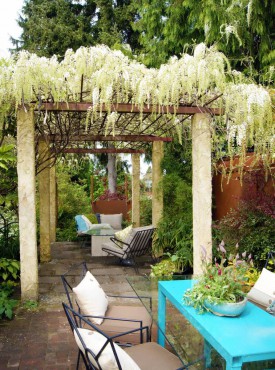 They became curious about the stories behind some of the furniture and soon realized that some of their castoff purchases were actually period pieces and quite valuable. Other pieces have been lovingly restored or patiently and cleverly repurposed. The Andersens can pretty much tell the history behind every piece they own and can look beyond the dust and patinas of aged pieces to see the true value underneath.

Their basement is filled with pieces and ongoing or future projects. Heather rarely lets others see the basement stash, but sometimes can be enticed to give tours to family and close friends. It’s a veritable treasure trove and has provided fond memories for others. Even this collections basement is artfully and tastefully arranged. A person could spend many enjoyable hours there.

Heather is a self-taught artist. One day at a garage sale, she found a box of oil paints and bought it for $10.

“I thought they would make a cool decorative prop, maybe staged with a blanket and picnic basket,” she says. 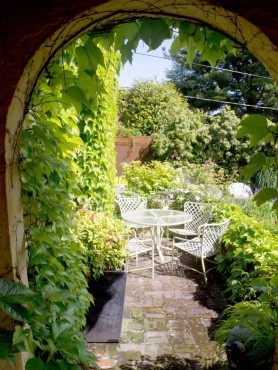 They lived in Seattle at the time and they saw a sign while on a walk that said, “Psychic the Mystic Rose — Readings for $10.” On a lark, they went in and consulted the psychic. Heather was skeptical and wasn’t sure she wanted to know her future but she decided to do it.

The psychic said, “Why aren’t you painting?” and added, “You’ll be working together and moving across the water. You’ll be surrounded by young spirited people and great energy.” Soon after, the Andersens moved back to Poulsbo where they’d grown up.

Seven years later, they went to Seattle on a day off. By then Heather had indeed started painting and she and Eric were surrounded by both young and old-spirited people through the nursery and the coffee shop. Heather’s first art show was at the Judith Schor Gallery on Capital Hill in Seattle, where it had all begun.

The paints she purchased at the garage sale were her first supplies. She works in both oils and acrylics, creating portraits, still lives and landscapes. Her portraits are especially striking and pull the viewer in. 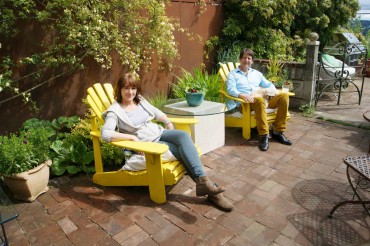 The room where her grandmother lived for the end of her life is now Heather’s painting studio. It’s a room splashed with natural light and it looks out on some of the gardens. Heather had taken a break from painting but is now doing it again. 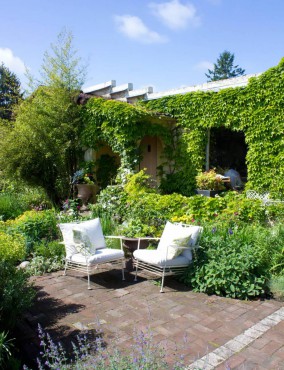 Filled with Caring Concern for Others

The Andersens are possibly half way through their own life journeys, but in that remarkably short time they’ve already experienced a rich tapestry of vocations. Because their careers have always been quite flexible and because they are extremely kind and giving people, in the last several years they’ve been caregivers to a number of their friends, who have since passed away from cancer and age-related illnesses.

They continue to create beauty inside and outside their home and the homes of others. Heather can be found working at Valley Nursery part-time during the busiest gardening season. Eric most recently managed projects for several businesses on Bainbridge Island.

Both Andersens continue to work on outreach and education efforts to bring comfort to those caring for loved ones. To nourish and sustain their own selves, there are always the lovely surroundings inside and outside their much-loved, historical home and lush, enticing gardens.