How Long is Truly Our West Sound Coastline? It’s a Bit of a Paradox

The length of our coastline depends on the length of the ruler used to measure it.
July 22, 2015 - Blog, Featured, The Outdoors - Comments:
Text by William I. Trandum 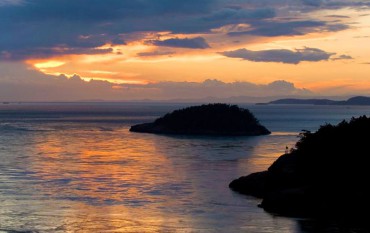 By simply using prominent points around the peninsula and measuring by the mile, the Coastal Zone Atlas of Washington (a product of the Washington State Department of Ecology) says the coastline of Kitsap County is 246 miles, Mason County’s 218 miles and Pierce County’s 232 miles.

But the eastern half of Pierce would not be considered part of the West Sound, so only using half of it, our West Sound shoreline would be about 580 miles long measured by the mile.

What do you bet it’s twice that? Four times? More?

In 1983, mathematician Benoit Mandelbrot proposed the notion of fractals to describe coastlines. The term “fractal” was first used by Mandelbrot in 1975. He based it on the Latin fr_ctus meaning “broken” or “fractured,” and used it to extend the concept of theoretical fractional dimensions to geometric patterns in nature.

Hang in there with me, reader, it gets simpler.

The underlying notion is that as the measurement unit gets smaller and smaller, there’s more and more stuff to measure, and more decisions to be made about what and where to measure.

So if we use yardsticks instead of mile-long milesticks to measure our coastline, we’d include measurements inside many small bays and inlets, and around many small islands in doing our calculation.

And if a river or a stream emptied into a bay, like they do in so many Puget Sound locations, we’d need to decide what part of each estuary is bay, and what part is stream-bed.

Mr. Mandelbrot would point out that if we were to use inches, we’d have to include thousands of little indentations, lagoons, points, outcroppings and other coastal features in our measurement.

It’s actually endless, according to him, because the measurements could get infinitesimally small — in which case variations in sand, gravel, rock and clay buildup along the shore would have to be included as part of the length of our shoreline.

And, how would we account for boulders or tidal islets that appear and disappear with the tide? Are their circumferences part of our shoreline measurement?

Absurd, you’re thinking, but not to Mr. Mandelbrot. He used his fractal theories to explain mathematically how many things in nature come to be ordered the way they are. Coastlines are just one of them.

While there’s not been a great deal of study of our West Sound coastline, there has been detailed study of the west coast of British Columbia. Of course, our Canadian brothers and sisters did the measurement in kilometers, probably to confuse us, so I converted them to miles.

If the measuring stick is a hundred miles long, the B.C. coastline is 600 miles from the southern tip of Alaska to the north-westernmost tip of Washington State. But measured using a mile-long measuring stick, the coastline measures 15,985 miles. That’s more than 26 times as long. Same coastline, shorter yardstick.

That is known as the paradox of the coastline.

Whether you gaze upon our shoreline from 1,000 feet high or from 5 feet high, the indentations, variations, bays and other features are quite similar. They are fractals, the same geometric patterns on a much smaller scale.

So let’s go to the shore, observe some coastal fractals and while we’re at it, let’s pick up litter. That will shorten our coastline because there will be fewer things to measure.

Hmm, there’s a question: Should man-made objects be included in coastline measurements?