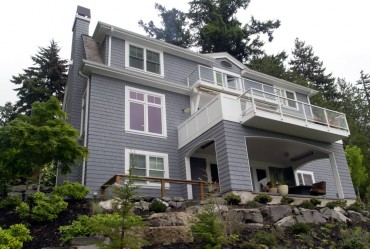 Fifty years later, the mill had closed and the county seat moved to its current location in Port Orchard, but the allure of the beautiful bay continued to grow with boaters and homebuilders flocking to its serene setting. Port Madison is now one of the most desirable locations in the Puget Sound region. 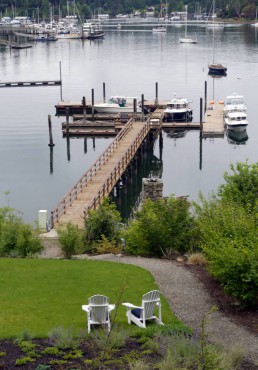 When John and Elizabeth Bierly first saw the long, sloping waterfront property with a west-facing view of Port Madison Bay, they were hooked. From its eagle-perch setting, the site overlooks an all-encompassing, storybook view of the harbor with sailboats at anchor, leisurely kayakers, proud wooden docks and water-loving wildlife. 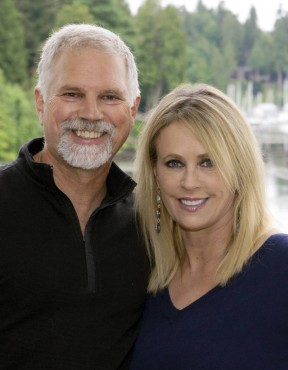 However, acquiring the building site of their dreams wasn’t going to be as easy as simply making a down payment and signing the papers. Oh, the land was available, but the superb setting meant they weren’t the only interested party. So the negotiations began. After months of offers, counteroffers and compromise, the Bierlys emerged as the excited owners of the idyllic property.

“It’s a gem,” says Elizabeth Bierly, an agent with Bainbridge Homes Real Estate. “I’ve lived on the water on every side of the island, and this place is the most special of them all. It’s everything John and I wanted.” 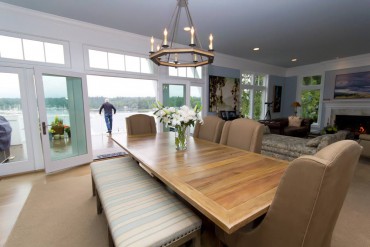 The 3/4-acre property slopes down to the bay, beginning with a wooded drive that opens to a clear, grassy view site and ending at the Bierlys’ shared dock. A piece of an old family farm, the undeveloped land came with a salute to the area’s past in the form of a 100-year-old rock fireplace that freestands at the shore: a feature the couple cherish for its history. The fireplace is the one immutable object in an ever-changing waterscape of boat traffic, mountain sunsets and passing seasons.

Now that the Bierlys had the site, it was time to design the house. On account of the steeply sloping site, the entire project would center on the lay of the land. But that wasn’t the only consideration; the home also needed to cater to a family of five boys and two West Highland white terriers, plus a collection of fine art and a houseful of guests at the couple’s frequent soirées. 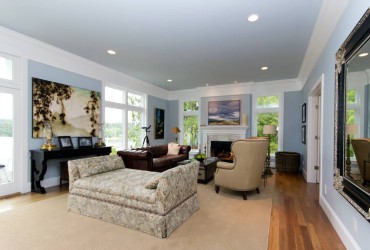 As for the design, the Bierlys chose a traditional look extending over three stories that put private rooms on the ground and top floors, and melded the main level into a grand great room. John’s at-home office would be conveniently located on the main floor, though distractingly close to the kitchen.

The art-loving couple faced a tough choice: Should they favor windows over walls to highlight every inch of the Port Madison perspective, or walls over windows to provide a backdrop for their collection of paintings by Northwest masters? Eventually they compromised and in the process came to see the house itself as art.

John, an architect and retired president of Callison, now with the Cameron MacAllister Group, designed the home and served as the general contractor, consulting with Joe Gates Construction, to connect the couple with suppliers, materials and subcontractors — and the work began. One of the first jobs was to erect a crane at the top of the steep lot in order to lower otherwise undeliverable lumber packages and roof trusses to the building site. 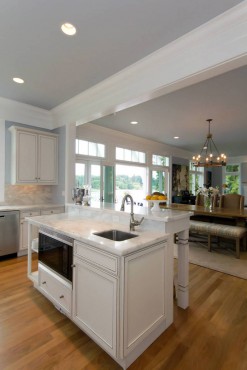 As the project progressed, the couple collaborated on interior detail and Elizabeth took the reins as lead decorator. White marble was chosen for the kitchen counters, fireplace surround and a folding surface in a laundry room so well designed that she lists it as one of her favorite rooms of the house. 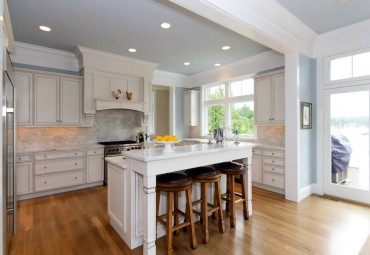 An onyx sink was selected for the main floor powder room. The master bathtub would sit beneath a view window. Closet systems were carpenter designed and built. Every detail was carefully considered: Even features as mundane as cupboard hinges were not overlooked, resulting in slow-close doors and drawers.

Once construction was complete, it was time to make the house a home with art. With the help of Elizabeth’s brother, art dealer John Braseth of the Woodside-Braseth Gallery of Seattle, the couple has acquired a number of fine paintings, many by Northwest artists. Included in the collection are a leafy interlude by Jared Rue and a dramatic nude by Polish painter Adam Grochowski, who survived the Mauthausen concentration camp, in part because of his artistic talent. 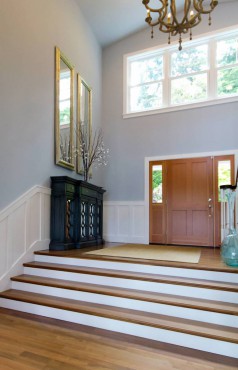 A Lisa Gilley landscape captures a bold Northwest vista of land and sky. In stark black and white, a Kenneth Callahan presents a cryptic, craggy mountain with horses that seem to have galloped in from a Paleolithic cave painting. A Victoria Adams sunset rounds out the home’s eclectic artworks. 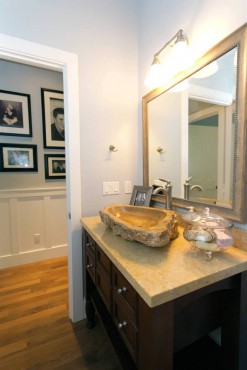 As the Bierlys settled into their home, the wide-open great room with its dazzling view began to fulfill its function as a gathering spot for everything from intimate family get-togethers to summer parties and serious social functions. One of the most memorable was a Christmastime reception for Gov. Jay Inslee in 2013. More than 50 guests including the governor himself filled the home’s main floor.

With such an appropriate venue for entertaining, the house continues to be a hospitable hub for the Bierlys’ friends. When the weather is fine, guests move to the home’s decks and terraces — or farther. 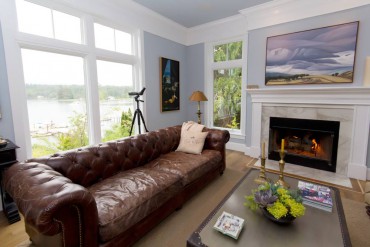 “The water draws you,” Elizabeth says. “Everyone who visits wants to go straight to the beach.”

And who can blame them, with all that is going on down at the water. Boats sail in and out, fishermen and shrimpers wheel coolers along the docks, and lighted Christmas craft float by at the holidays. Of course, some of the bay’s occupants are wilder than others.

“We’ve seen otters, seals and a pair of owls,” John recalls, pointing out an eagle sitting on a nearby dock. “The eagles are breathtaking. Sometimes when they’ve caught something, the crows show up and start a dog fight to try to get them to drop their catch.”

For John and Elizabeth Bierly, every moment spent in their home is about making memories. After all the hard work, they are now thoroughly enjoying the fruits of their labors.

Elizabeth sums up the charms of her family’s home and its world-class view simply: “I could sit here forever and just watch.”