In this art-filled Rockaway Beach home, the view is the ultimate masterpiece
May 18, 2015 - Featured, People & Places - Comments:
Text by Wendy Tweten Photography by Molly Shurtleff 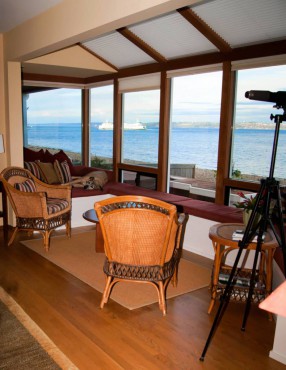 As local gallery enthusiasts know, there are countless ways to capture the charm of the city’s streets and skyscrapers with paint and brush. However, while watercolors and encaustics are all very well, Tom and Gretchen Seifert of Bainbridge Island prefer to enjoy the city in real time, framed by their windows as living art in nearly every room of their Rockaway Beach home. 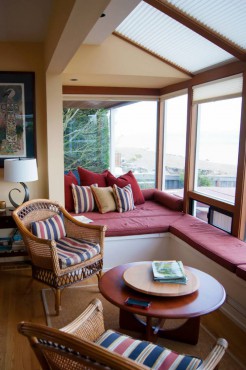 The shorefront setting of their modestly sized two-story puts the Seiferts front and center for an iconic Northwest view of the Seattle skyline suspended between sky and Sound. Eagles glide past and sea lions pop up from the waves with beady-eyed curiosity. Twice an hour, the ferries glide by on their appointed rounds. On a clear day, the 200-degree view extends from Mount Rainier to north of Mount Baker. In a home where art is appreciated, the view is the consummate masterpiece.

In fact, the view was what first attracted the Seiferts to the little home. It certainly wasn’t the architecture. As described by the couple’s friend and designer Saffronia Baldwin, the house was “built wonky,” the product of original owners not architecturally inclined. However, under the Seiferts’ ownership and the skilled hand of architect Tom Johnston of Johnston Associates of Bainbridge Island, the “wonkiness” soon became an asset. 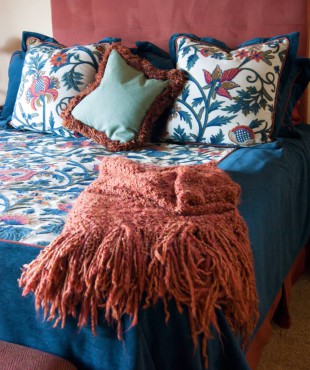 “There’s no other floorplan like this anywhere on the island,” Baldwin says. “It’s unpredictable; it has character.”

With a structural overhaul and some judicious reformatting, the house emerged as a perfect fit for its setting. Long and shallow along the shoreline, the floorplan puts all the main living areas — every room but the bathrooms, laundry and wine room — directly in line with the view, then proceeds to frame that view so each room appears to have a very large and lovely postcard upon its eastern wall. 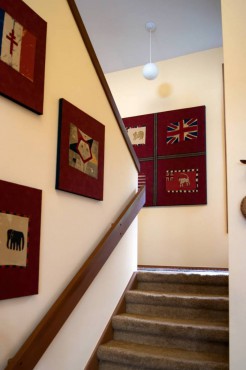 During the remodel, walls between the kitchen, living and dining rooms came down, merging the area into an open great room. To the front, a large bay window addition provides comfortable accommodations from which to watch the boats go by. It also serves to bring in extra light and gives Tilley the Rhodesian ridgeback a place to survey her territory. Outside the bay window, a double-level deck overlooks Puget Sound and the city scene, and is often enjoyed by the homeowners from a reclining position in the hot tub. 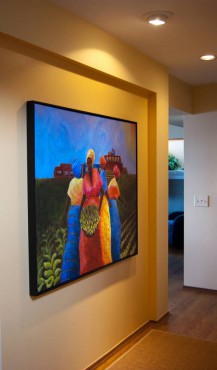 Once the renovation was complete, it was time for Baldwin to make the Seiferts’ house a home. She started slowly, working piece by piece within the couple’s budget and letting one decision lead to the next. In this way, the home’s design developed gradually over three years.

“Taking our time that way was ideal,” Baldwin recalls. “It allowed Tom and Gretchen time to sit with each addition before making the next choice. It also gave us the chance to decide when to go ‘high end’ and when to look for more affordable alternatives.”

The designer began the Seiferts’ job the same way she approaches all her jobs: by first identifying the client’s lifestyle and priorities. Her goal is to tap into what inspires the individual. Baldwin believes that her clients should go out into the world knowing they’ll be coming home to a sanctuary that reflects their deepest self.

Gretchen, a California native, had painted every wall in the house white in anticipation of dreary Northwest winters. So Baldwin’s first challenge was to rectify this somewhat clinical quality with a new color scheme. This she based on Gretchen’s strawberry-blonde hair — morphing it into a rusty red — and navy blue, an appropriate choice considering Tom’s former career in the seagoing branch of the armed services. 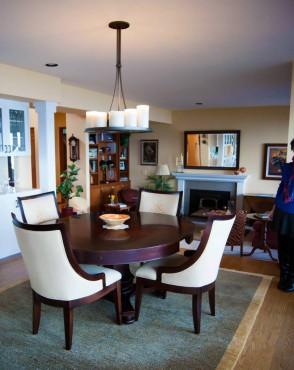 These two colors are repeated throughout the home in a variety of forms and textures. They manifest in hand-knotted rugs, upholstery, dinnerware in the dining room hutch, art and crewel-work bedding in the master suite. Textiles were so central to the project that the quest for them became something of a treasure hunt.

“Gretchen and I had a lot of fun with fabrics,” Baldwin admits.

This fascination with fabric extended to the choice of art. The day Baldwin carried in a large swathe of cloth composed of eight panels in colonial-African motifs, the three were stumped how to use it. The colors were right, the effect was inspired, but the size was daunting. 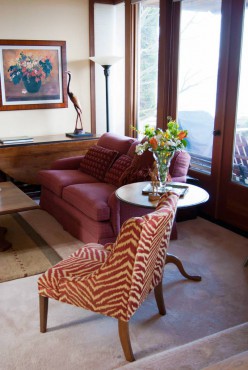 Before long, the lightbulb came on. Baldwin separated and framed four of the panels to hang along the stair wall. The final four remained conjoined and were mounted to continue the theme to the landing.

The couple’s travels are also reflected in the décor, which lends it ethnic undertones. In the entryway gallery, a large batik of elephants and fish was purchased by Gretchen in Tanzania — a trip during which she climbed Mount Kilimanjaro. Painted metal panels are a memory of a wine-tasting trip to Healdsburg, Calif. Other pieces were collected from local galleries. But perhaps the Seiferts’ favorite artwork is one painted by Baldwin herself: a brilliantly colored image of women in headscarves harvesting a leafy field. 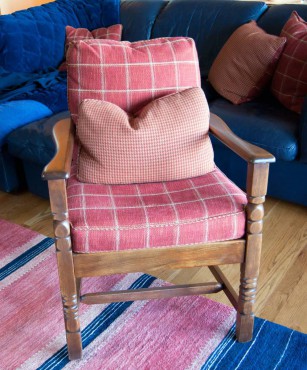 Although their home is filled with thoughtfully chosen components, the Seiferts retain a few old memories. One of the most cherished is a mission-style chair that occupied Tom’s childhood bedroom. The chair is reported to carry the phone numbers of Tom’s first girlfriends, jotted on the underside of the seat by a boy with parents who held strict views against middle school dating.

A notable aspect of the Seiferts’ home is the attention Baldwin paid to the lines of sight. Not only did she capture the long views by drawing attention to Seattle, 9 miles distant, she also encouraged the eye to take the near views with art that echoes the fabric colors from one room to the next.

Throughout the process, she worked side-by-side with the homeowners. Gretchen particularly enjoyed the experience, treating it as a learning opportunity. In her role as an unofficial student of design, she says her eyes were opened to how a design comes together. 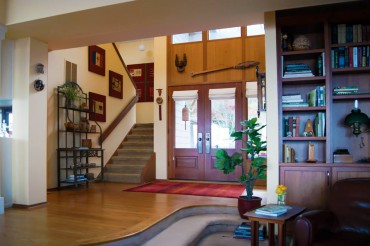 Now, after nearly 25 years in the house, her décor continues to evolve, but slowly. Gretchen loves the home she lives in and recognizes that successful interior decorating is about limiting new acquisitions to those that fit a theme and are good enough to replace an existing element. It is, she explains, about asking yourself why you have — or want — a particular piece.

One thing the couple would never change is their moment-by-moment Sound and city portrait. Possessions may come and go and great works can be lost, but an unobstructed view is forever.