A Perk of the Merc — A Century of Coming Together 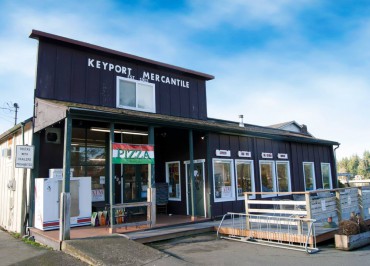 For more than a hundred years, the Keyport Mercantile has stood as the heart and soul of its community. Affectionately known as “the Merc,” the business has ridden out the rise and fall in the fortunes of its hometown alongside the people it serves.

From its first years, when Millie the farmer’s wife loaded her wagon with coffee and flour, to the modern day when Melissa and Michelle stop by in an SUV to split a Reuben, the establishment abides. Wagons have given way to motor cars, cell phones and computers have become part of everyday life, and 155 acres of the original community became a naval base. And yet, because of a small group of dedicated citizens, the Mercantile survives. 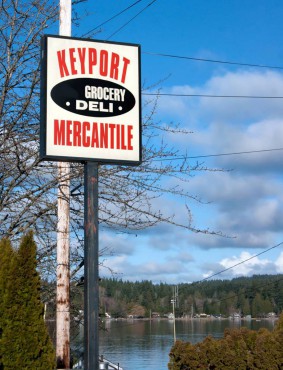 By the turn of the 20th century, the little farming and fishing village of Keyport was hungry for provisions from a place that didn’t require a daylong ride on gravel roads or a hearty row down the bay to Poulsbo. In 1896, a new dock expanded the town’s horizons by bringing in Mosquito Fleet ferry service. Of course, every port needs a name, so the town officially became Keyport. Seven years later, in 1903, the Keyport Mercantile was constructed at the ferry dock for the convenience of locals and travelers alike. 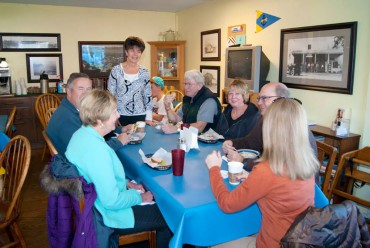 For many years, the dock and adjacent mercantile were the center of activity for this otherwise bucolic burg. The boats of the Mosquito Fleet steamed back and forth, dropping off visitors and carrying Keyport residents to Seattle for shopping trips that were easier for the families than driving the meandering, rustic roads of the peninsula. The marine waterway also filled the shelves of the Merc — several times each week the path from the wharf to the store bustled with deliveries of housewares and foodstuffs. 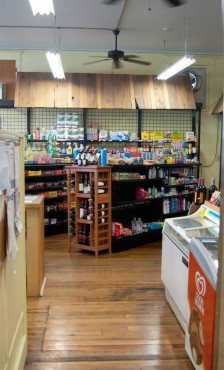 For 11 years, the Merc sold pickles and penny candy and all the necessary staples for life in a rural Kitsap community from this dockside location. Then, in 1914, the Navy came to town. In what was perhaps the greatest shift any Kitsap County town has ever experienced, the core of Keyport was annexed for a torpedo base. 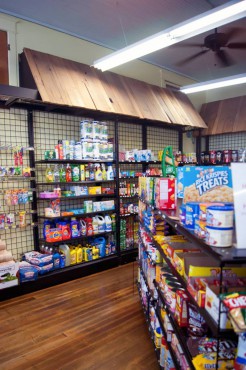 Although the base would mean a significant boost in jobs and population — and a change from an economy based on agriculture and fishing to one of manufacturing and military — it also meant that families and businesses within the new base’s boundary had to pack up and relocate. The Keyport Mercantile was no exception, and the move was completed wholesale by barging the entire store to a new site just outside of the base, near the current town dock and marina, where it remains to this day. 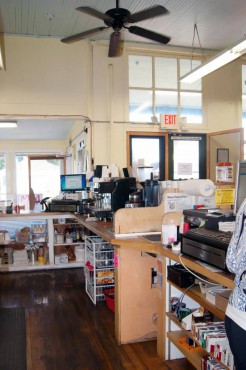 For more than a century, the little store has seen history in the making. During World War II, barrage balloons floated above the town. Soldiers in tents guarded the perimeter of the base. The Merc outfitted its windows with black blinds, as did all of Keyport, for nightly blackouts.

At dusk, the haunting call of Taps filled the air. As dark fell, air-raid wardens patrolled the streets, alerting citizens to any leaking light that could give away the position of the torpedo station. Gas rationing during the war kept families close to home, and the Merc was there to provide groceries to its hardworking town.

Time marched on. The Husbys, the Hammersloughs and a host of other mercantile proprietors came and went. By the start of the new millennium, the Merc was in need of a fresh start. Old-timers and newcomers alike recognized the importance of the store to the town’s identity. Enter the Downtown Keyport Corp. (DKC), a group of five couples who banded together to ensure the Merc would not fade away.

The members serve in a variety of roles, including president Mech Watne; secretary Ellen Strong, who also handles marketing; and treasurer Jackie Lewis, the on-site manager.

“The Merc is a community resource we couldn’t afford to lose,” explains Lewis. “It makes Keyport Keyport.”

In 2006 the store closed. The DKC took over management and, after a careful renovation, the Merc reopened in 2007. The challenge was to make improvements while maintaining the establishment’s vintage character.

The building has two sides: old and slightly less old. On the antique half, visitors can tread the same wood flooring that customers have used for a hundred years. The boards were preserved, Lewis says, by generations of old-fashioned sawdust and oil. The DKC, although wishing to preserve history as much as possible, elected varnish over sawdust.

The building also had no heating or cooling system. Making climate control even more difficult, the Merc has no insulation. The members of the DKC scrubbed the structure inside and out, repainted and added new shelving. They also updated the food service for lunchtime offerings of sandwiches, salads and homemade soup, joined by pizza and calzones after 3 p.m.

The newer side of the Keyport Mercantile is a cozy dining spot with tables covered in cheerful, blue and yellow cloths. The walls display photos from the town’s early days, on loan from Keyport’s Naval Undersea Museum. A television set is accompanied by rows of movies; other shelves hold books and games. The best seat in the house is the corner table with a view of the Port of Keyport marina. In summer, diners can also enjoy the small-town setting from outdoor tables.

The Merc not only serves the 223 households of Keyport, it employs most of its workers from the community. A popular destination for base workers, tourists and boaters, the establishment is a regular on the Tour de Kitsap summer cycle and the kayaking event, Paddle Kitsap. And it’s a must-do for visitors coming to September’s Keyport Fest to enjoy the music, vendors, fishing derby and Navy deep-sea divers who demonstrate their skills in an enormous glass tank.

If Millie hitched her horse outside the Mercantile today, she might be puzzled by items such as the panko and coconut milk available inside. But one thing remains the same: For 112 years, the Keyport Mercantile has been the place where Keyport comes together.