Windows to the Past

Ole and Ellen Kvinsland Had a Farm… 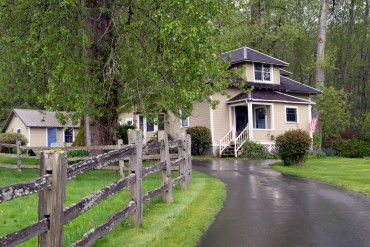 Ole and Ellen Kvinsland would bust their buttons if they could see their homestead now. If they climbed into a time machine and dropped by for a visit, they’d find lots of changes to the old farmhouse, but they’d also find the important things have stayed the same. They’d recognize the architecture, the layout, the gabled roofline and the high ceilings — even many of the windows that Ole himself installed.

In 1907, when Ole and Ellen built their farmhouse off what is now Poulsbo’s Sawdust Hill, they were no doubt too busy milking cows, tending chickens and having babies to worry about the long-term future of their little house. As it turns out, they needn’t have worried: The day their home fell into the hands of Meg and Richard Burkett, it was destined to become a part of Kitsap’s living history. 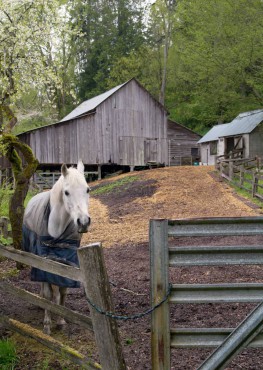 “Richard and I came [to Poulsbo] and started looking for property,” Meg Burkett recalls. “We stumbled upon Sawdust Hill and loved driving under the canopy of trees. We were excited when we saw this farm: a sweet house and perfect horse property. We thought it was crazy to just move here after two brief weekends, but both of us said the next day: ‘If we don’t buy this farm, we’ll regret it for the rest of our lives.’ So we did. It was a great decision. No regrets.”

It was Richard who first connected to North Kitsap. In the early 1980s, he made his living fishing for tuna 400 miles off the California coast. There he met a fellow fisherman who lived in Poulsbo. A friendship grew, and eventually the Burketts were invited to the man’s home. Meg, a former exchange student to Sweden, fell in love with the little town and its Scandinavian roots. In 1984, the couple purchased their own piece of Little Norway.

To some, taking on a 77-year-old farmhouse might seem daunting. But the Burketts were no strangers to vintage homes, having owed a circa 1884 south-coast Oregon Victorian. Now they were starting over with a classic American Foursquare, which had a few issues. 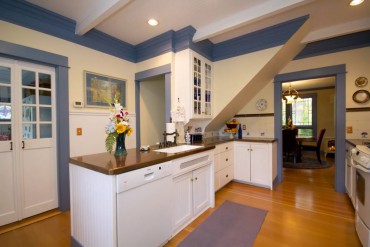 Three owners between the Kvinslands and the Burketts had made various revisions to the home; revisions that reflected the era-of-the-moment rather than the spirit of a heritage farmhouse. In the 1940s, asbestos-based linoleum had been glued to the clear fir floorboards of the living room. In the 1960s, drop ceilings had lowered the stately, early 20th century headspace. In the 1970s, unfortunate herb-and-orange-teapot wallpaper infested the kitchen walls. A 1980 master-bedroom addition was neither inappropriate nor unwelcomed, but it followed the lay of the land, resulting in odd, toe-catching changes of elevation. 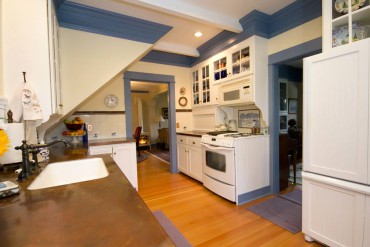 Right from the start, Meg Burkett had a vision for her new home. Fortunately for the discrepant dwelling, she had both an ongoing interest in houses (she is now a broker for Realogics Sotheby’s International Realty) and a degree in art history. During her time in Sweden, Burkett came to admire the work of Carl Larsson. In the early 1900s, as the Kvinslands cleared their land and pounded nails, Larsson painted scenes of home and family that epitomized the arts and crafts movement. It was a perfect match for a farmhouse of the same era. 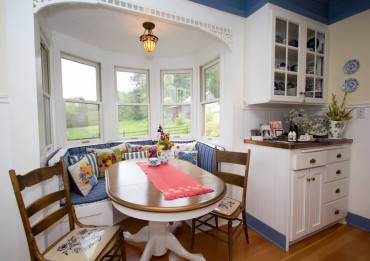 Not only Larsson’s work but his home, too, inspired the Burketts. Little Hyttnäs, as Larsson’s cottage is named, has been preserved as an example of design that is light, informal and comfortable. It is a mix-and-match of old and new, with colorful textiles, bare wood and hand-painted murals. Its message of harmony and creativity appealed strongly to Burkett, especially after visiting the home in person. Above all, she and her husband wanted a warm and happy place to raise their children. 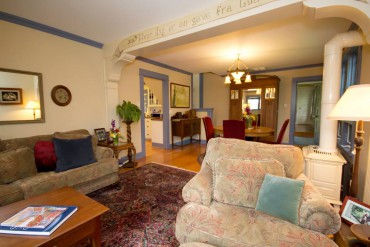 So the work began. The first step was elimination. Down came the false ceilings. Out went orange-peel wallboard and cheap paneling. Up came the old linoleum. Unfortunately, because of the asbestos involved, the fir flooring underneath couldn’t be saved, so the Burketts covered it over with new fir boards. In other areas of the home, where the flooring had been spared the indignity of linoleum, the original clear fir was refinished. The major structural challenge during the great tear-out was the removal of two weight-bearing but dated living room columns that were replaced by a supporting beam.

With the discordant elements removed, the Burketts now faced the decision of what to add back in. They carefully selected only materials that would have been available in 1907. In the kitchen, that meant granite or laminate countertop was out and sheet copper was in. Beadboard wainscoting was used in rooms throughout the home and was joined by a beadboard ceiling in the kitchen. A blue-and-white tile kitchen backsplash took on a personal touch with images that reflected life at the farmhouse: a bird, a tree frog, a mare and foal, an apple tree and images representing the couple’s three children. The tiles, as well as the columbine motif of the bathroom sinks, were hand-painted by Indianola artist Susan Butler. 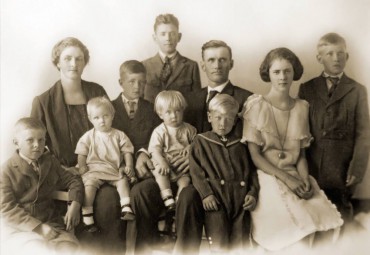 In the living room, the couple created a relaxing interlude of comfy couches, a fir floor with richly colored area rug and large, blue-trimmed windows. Blue is a theme throughout the home; in fact, Burkett, has a reputation among her friends as a woman who “loves all colors, as long as they’re blue.” In keeping with the Larsson emphasis on textiles, the walls are hung with needlepoints created by Burkett’s father — most of which, she recalls with a fond smile, he stitched while watching football. 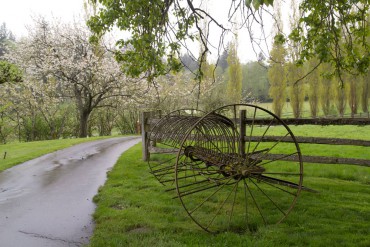 In yet another salute to Carl Larsson, the Burketts commissioned Bainbridge Island artist Barbara Wilson to paint murals in many of the rooms. The new living room beam carries the family motto: “Every day is a gift from God,” written in Norwegian.

The front-door panel pays homage to Monet’s “Morning on the Seine near Giverny.” Another door bears Monet-inspired poplars, with the inclusion of a favorite family horse. Wilson’s flowers take the place of framed art in several rooms.

Eventually, the work was completed and the family settled in. Before long, the Burketts’ two children were joined by a third, a boy born in the master bedroom of the much-loved home. Life on the farm was a good one for children. At one time, each had his or her own pony. In the fall, there were apples to press from the vintage orchard and, afterward, fresh cider to drink. 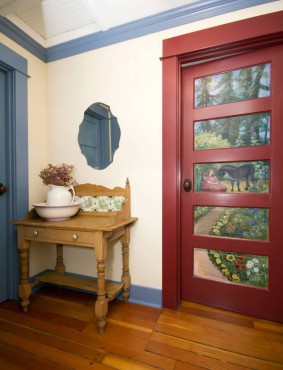 The Burkett children are proud of their home. So when Meg joked that it should have a birthday party upon turning 100, the kids took her seriously. The result was an all-day celebration in May of 2007. Of the many guests who dropped by, several were past occupants. But the grand dame of the lot was Elaine Gerstenberger, daughter of Ole and Ellen Kvinsland. Elaine, now 91 and living in Poulsbo with her husband, Ed, was born in the farmhouse, the seventh of nine Kvinsland children. She grew up on the farm, leaving when she was 18.

Yes. Ole and Ellen would be proud. Their old home has not only survived, but thrived owing to the talents of Meg and Richard Burkett. Now Meg is in the process of registering the farm as a National Historic Landmark, assuring its preservation. With luck, Ole and Ellen can fire up the time machine again in another hundred years.