Cooking Is a Family Affair 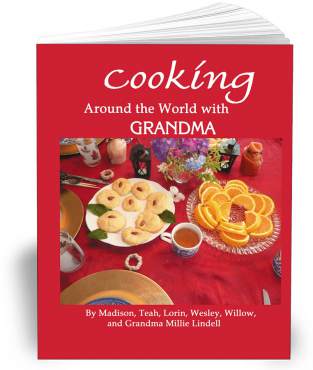 Millie Lindell gets to spend quite a bit of time with her five grandchildren. Both she and her adult son and daughter live on Fox Island, so the family spends a lot of time together.

But Lindell wanted a special project with her grandkids — something that would create lifelong memories. The solution? A cookbook that the six of them could produce together.

“Cooking Around the World with Grandma,” self-published last year, is a collection of recipes from around the world. Lindell and the kids took part of a summer to research, plan, cook and serve the meals to the entire family, and in the process kept notes and photographed their adventures for the book.

“The goal was to build a relationship with the grandkids and with each other,” Lindell said.

Every youngster had a job. Willow Bonnici, now 5, did much of the stirring. Her brother, Wesley, now 7, helped cook as well. Teah Lindell, 14, decorated the tables for the photographs using each country as a theme. Her sister, Madison, 15, was the graphic designer for the project, creating the book and the cover. The oldest, Lorin Lindell, who is now 18, cooked.

The six started out by brainstorming favorite foods and countries.

“The first country (China) was the hardest so we started with basics and went from there,” Teah said.

They used multiple resources, both from the library and the internet, to choose recipes for each of the six countries. Each country includes a three-course menu as well as some fun facts about the culture. The recipes range from the more familiar foods such as Greek salad, tamales and egg rolls, to the more unusual such as Bucatini All’Amatriciana (Italy) and Boca Negra Mini Cakes (Mexico). Every recipe the family made during the project went into the book, even the “mystery stew” from Switzerland that was everyone’s least favorite. 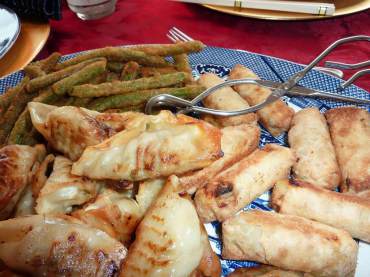 “We tried to find something that captured our interests,” Lorin said. “A lot of the recipes were kept simple so kids could do them.”

Each of the cousins ended up with a favorite food — like chocolate fondue for Madison and Thai barbecue chicken for Teah. But they all made sure to get a taste for each culture by doing research, and for a variety of foods by tasting them all.

“It’s important to experience things even if they’re not our cup of tea,” Lorin said.

The two sets of the kids’ parents were hands off during the six-week affair. Their job was to enjoy the meal and give feedback. 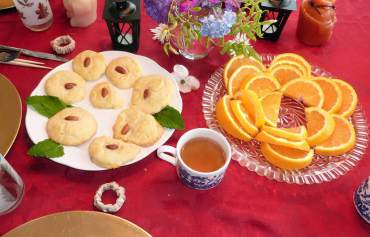 “I thought it was a neat idea and a great way to create memories,” said Tracey Lindell, the mother of the three oldest girls. “We do a lot of family dinners so it reiterated the concept for them.”

Besides a book to show off, the cousins are happy to have learned new things. Teah, for example, discovered she has a love for decorating, while Madison enjoyed being hands-on with technology.

Lorin, on the other hand, cooks a lot more for her family and her friends. “This gave me the skills to take any recipe and perfect it and change it into my own,” she said.

From “Cooking Around the World With Grandma”

Millie Lindell said she loves seeing other grandparents get excited about an idea for something they, too, can do with their grandchildren. And she and the grandkids are already considering the possibility of the next project, an ABC book.

Most importantly, she said, “Cooking Around the World with Grandma” accomplished what Lindell set out to do — help the family bond and create fun memories. Especially since the kids are so busy with their own activities — from soccer and karate to sailing and robotics — that it’s becoming more challenging to carve out time together.

“The family got to eat and we got to cook, what could be better?” Teah said. “The best part was when our families got together and appreciated the meal — and we had a part in that.”

“Cooking Around the World with Grandma“ is available at Mostly Books and Teaching Toys Too in Gig Harbor and Liberty Bay Books in Poulsbo, as well as online at Amazon.