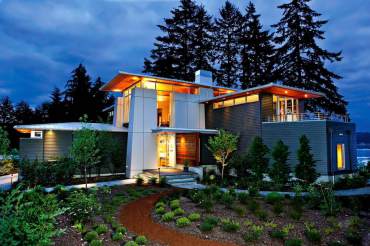 A constricted waterfront lot. Complicated drain field regulations. Dreams of an elegant yet budget-conscious home. Hardly a job for the average architect.

What the owners of this construction conundrum at the mouth of Fletcher Bay needed was a puzzle master, and they found him in Bainbridge Island’s Peter Brachvogel. Not only does this architect have a head for spatial brain teasers, but he finds that boundaries can inspire.

Brachvogel was no stranger to this particular piece of land. He’d worked with the prior owners who, when the project was restricted to a two-bedroom permit, decided the resulting house would be too small for their young family. When the property came back on the market, sharp-eyed neighbors sent the listing to friends in Georgia who’d long dreamed of moving to Bainbridge. The couple immediately booked a flight. 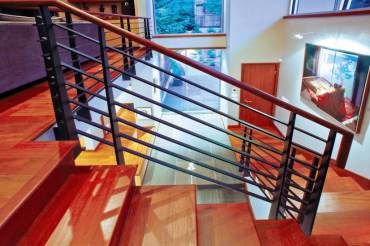 As with many other island properties, the lot’s history of habitation began in the early 1900s with a rustic summer cabin. At the end of the Second World War, the cabin received a dubious upgrade involving plywood. When the couple from Georgia viewed the land in 2009, they were not initially impressed.

“It was a wreck,” recalls the wife. “There was a rundown cabin, a falling-down carport and huge drainage test holes. But the view and the western exposure were just what we wanted. Peter [Brachvogel] had been working on the project, so we decided to keep him on. Looking at the place, all we could think was, ‘This guy better have a vision.'”

And vision he had. The couple soon came to rely on the architect’s instincts. 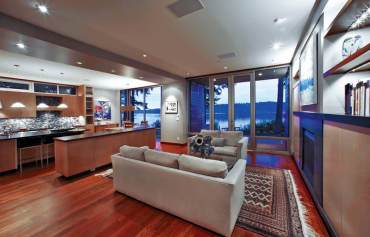 Brachvogel, whose firm, BC&J, is known for residential and commercial design that includes the 2000 Roche Harbor redo, knew that the size and shape of the house would be dictated by the footprint of the ramshackle cabin. The site of the old carport would become the drain field. Not an inch could be wasted.

“Three factors drove the design,” Brachvogel says. “The site, the owners’ wishes and the view. Also, whenever possible, we responded to the elements: the direction of the wind, the rain and the heavy afternoon solar exposure. It was a challenging project, but the owners were open to suggestions. They were delightful to work with.” 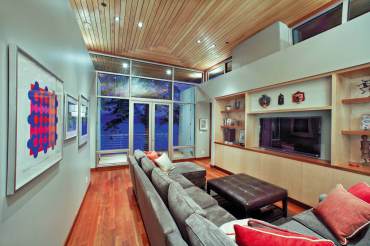 For their part, the owners preferred a design that was modern but not cold nor stark. Their few requirements included a master suite on the main floor and lots of glass to accommodate views of Agate Pass, the Olympic Mountains and the Bremerton ferry. In addition, everything possible had to be purchased or contracted locally.

Brachvogel began inside, centering the design on an open-living hub from which all else grows, a social living area he calls “the soul of the house.” Battered posts and walls extend from this domestic core, providing an angled interest of roughly eight degrees.

“We played the ‘solid/void game,'” Brachvogel explains. “Expanses of glass are juxtaposed with strong mass. We dug deep into the art of the solid. The fluted design makes it all work.” 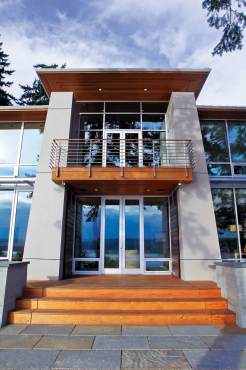 Keeping the Design in Line

In addition to the angles, an equally intriguing architectural effect appears on the upper floor in the form of an umbrella roof in which clerestory lights underscore the central ceiling. This unusual feature required copious steel to be buried within the frame. After dark, diffuse under-lighting makes the roof appear to float above the residence.

Across both floors, the view was treated with special care. Nine-foot windows with professional-grade, slender, aluminum mullions enhance the “membrane” aesthetic. From the glass to the doors, to the blinds and latches, the angles kept the contractors on their toes.

“I remember the day the man came to measure for the blinds,” the wife says with a laugh. “He said, ‘OK, here’s a new challenge.'”

In some areas, the angles proved to be an advantage, such as in the battered walls that extend out to protect the deck from wind, and the view windows tucked beneath overhangs that help shade main living areas from the afternoon sun. 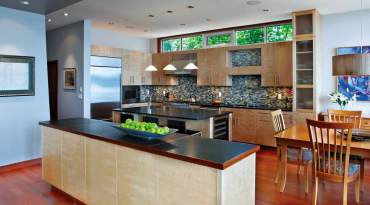 The architect and the owners agree that Port Blakely Builders deserves high marks for their success in keeping the battered walls and columns in line and bringing the project to a beautiful conclusion. Logistically, it was a difficult house to build. Nothing could be driven across the high-tech, pressurized drain field, which sat in the middle of everything. So crews were forced to hand-carry most of the materials.

Once the shell was in place, it was time to appoint the home. The owners chose understated, elegant materials and little luxuries such as a heated floor and shower in the master bath, and an indoor/outdoor fireplace: wood-burning on the deck, propane in the master bedroom. Rather than being hidden, the dual stainless-steel chimneys were embraced, and allowed to reflect the sun as art where they glide past second-floor windows. 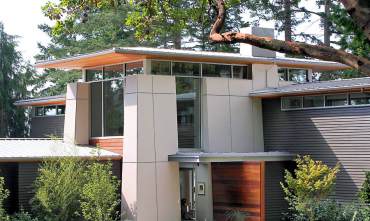 Three wood species were repeated throughout the interior: Brazilian cherry flooring, mahogany trim and pocket doors, and hand-crafted, white birch cabinetry in most rooms. Outside, the woods of choice are cedar decking, ipe barn-style storage doors and hemlock soffits that run inside to the ceiling. Mesabi matte black granite, honed to the texture of leather, crowns kitchen countertops.

Wherever possible, Brachvogel went the extra mile to deliver character and precision. Solid-core, African mahogany pocket doors prevent the diluted battered edges, which would have been the price of swing doors. At the southwest corner of both floors, the edge was “peeled away” and made transparent with corner windows. “An expensive stunt,” Brachvogel admits, “but one that really expanded the scale.”

The owners appreciate the many little indulgences that make their new home both practical and comfortable. Storage space was fitted in at every opportunity. In the master bedroom, a window seat invites those with a few moments and a cup of tea to espy sailboats, orcas and winter white-caps.

“The house is perfect. It’s us,” the wife notes. “It has the scale and feel of a cottage but with a modern finish. It looks as spectacular from the outside as it does on the inside.”

This article was first published in the Spring of 2012 print edition of the WestSound Magazine. Any discrepancies, omissions, or inclusions that seem incorrect are purely due to the age of this article. WestSound Magazine deemed this article useful and beneficial as a contribution to today's readership, and therefore is included in this site's online article archives. If you feel the content of this article is detrimental due to its age, please feel free to contact us to request removal or modification.
Tags: bainbridge island, construction, craftsmanship, décor, design, home, northwest, view, water