Forever Home with a View

When Kathy and Bill Cole bought their Seabeck home more than a decade ago, they knew they would need to remodel sooner rather than later. Built in the 1980s, the home still sported the signature look of the era — shag carpeting, lots of gold and brown colors and the like.

“We bought the house because we fell in love with the site,” Kathy Cole says. 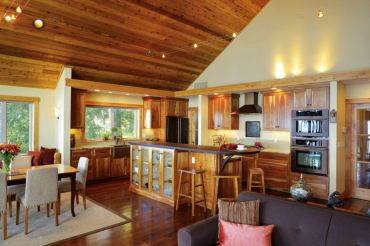 The site, indeed, is gorgeous. Sweeping views of Hood Canal and Olympic Mountains, beach access and a quiet neighborhood were among the many attractions.

What the Coles didn’t know was just how badly the home was in need of a remodel. Telltale signs of structural issues soon began to show up. The clincher? Turned out the basement was being held up by jacks, unnoticed by the home inspector.

When the couple got bids for the remodel, the home required so much major work that it would have cost almost as much as new construction. It was time to rebuild. 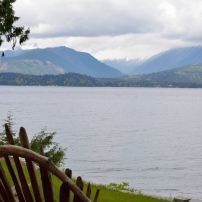 The Coles took full advantage of the opportunity to design their own home. Kathy, a graphic designer by profession, designed the interior herself, with assistance from Michelle Doyle for the colors.

And they didn’t stop at the design. Once a contractor built the shell for the 3,000-square-foot home, Kathy and Bill took over as their own general contractor to finish the rest and even did some of the work themselves. Bill was especially excited to build some of the cabinets, finish floors and do other labor.

“We were very involved in rebuilding. I enjoyed actually getting in and pounding a few nails and finishing off some parts of the home,” he says. “It was fun to watch it go down and then be rebuilt from the dirt — and seeing every aspect of it. I really know this house.”

The new home is distinctly different. Designed to take full advantage of the site, the home not only has space for everyone’s interests, but also has flexibility for future needs.

All the public and gathering areas are on the main floor while the private rooms are in the basement — at least for now.

One feature Bill and Kathy emphasized was open spaces. Doing away with the concept of separate family and dining rooms, they created a great room instead. It’s the kitchen, living room and dining room all opened up into one shared area. Plus, the glass back doors open up completely into the deck, bringing the outdoors in.

“We tried to use things for different purposes,” Kathy says.

The family room is another example. It’s a combination TV/game/music room and gets used a lot, especially when their teenage son’s friends come to hang out. The family room, adjacent to a full bathroom, can be converted into Kathy and Bill’s bedroom down the road for “aging in place.”

“It can transition if we have to. It gives us options,” Kathy says.

Even the entryway serves a dual purpose. It was designed as an art gallery of sorts, a place where the Coles can display their art collection. Another distinct element of the design, which can be observed in the hallway, is the thoughtful use of sight lines throughout.

The open space concept can also be spotted in the mudroom/pantry — originally planned as two rooms, the two spaces don’t have a wall in between them — and downstairs, where the hallway doubles as the laundry room.

The Coles used as many natural products as possible. The home features seven species of wood — Kathy admits they’re “woodaholics”— as well as materials such as marmoleum flooring in the mudroom, copper sink and fixtures in the kitchen, cork flooring in the downstairs hallway, stone and slate in the bathrooms and bamboo countertops in the master bathroom.

The walnut wood planks for the great room floor were ordered raw and came complete with sapwood and knots. “We like character. We love the imperfections,” Kathy says.

Everywhere throughout the home there are elegant finishes and details that speak to extensive shopping. One example is the copper kitchen sink, which the family calls the never-ending art experiment because it changes colors based on what’s in it. The sink had a few imperfections and consequently, it was a great buy. “I bought it for a song,” Kathy says.

The architectural columns framing one end of the upstairs hallway were salvaged from a century-old home on Bainbridge Island. The Coles even found a fireplace that converts from a gas insert to using wood — a compromise because they each wanted different things.

“I spent a lot of time shopping. If I didn’t have the internet, there was no way I could have done it,” Kathy says.

Although they shopped around quite a bit, Bill says they didn’t skim on details and they even overbuilt structurally. “Every time we made a decision, we wanted to make a quality decision because we wanted the home to last,” Kathy says.

Built for Family and Friends

Kathy and Bill Cole both work from home. Bill, who is a retirement planner, used to have a storefront but now has an office next to the master bedroom. Kathy can work on her laptop anywhere in the house — one of her favorite places is the covered deck area where she can enjoy the fresh air. She also has an office in a remodeled cabin that once was part of a Maple Beach resort — a collection of four cabins and two day cabins/changing rooms (including the one now housing Kathy’s office) built on their property by a German immigrant couple, known to neighbors as the “Johnnie family,” in the 1930s.

“The historic cabin was our first project. It was about to fall in the ocean,” Kathy says. “We tried to keep it as close to original as possible but everything was rotted… The original building is here but it’s sandwiched in between new materials.”

Most of the space in the 125-square-foot cabin is dedicated to Kathy’s art studio. Although she doesn’t have a lot of time for artistic pursuits, in her spare time she likes to create stained-glass windows and painted gourds. She got into stained glass when she wanted a panel for the cabin but couldn’t find what she liked — so she took a class with Dahl Glass in Poulsbo and “just kept going.”

The cabin still has one original window with a rope and counterweight for opening. Another window came from an old cabin owned by neighbors.

A nook serves as Kathy’s actual work desk, which overlooks the water.

“I come here when I need peace and quiet,” she says. “I’m lucky to have this space.”

One other building on the half-acre property is a 600-square-foot cottage that was once a double-car garage. The family lived there for 18 months while the home was being built — an experience that Bill and Kathy say they loved because it brought the family closer together. These days, the cottage serves as Bill’s music room (Bill is a musician) but can be used for an overflow guest area.

As much as the Coles love their lifestyle on Hood Canal — kayaking and playing on the beach — so does their extended family. The home serves as a gathering place during the summer as well as during holidays.

“The function and the flow works great for us,” Kathy says. “It fits our lifestyle and our family well.”

5 Safe Pollinators and How to Attract Them...

Where to Take Household Hazardous Waste in Kitsap...

Things to Know When Shopping for a Generator