Wasp Numbers on the Rebound — Avoiding the Stings

Ask any gardener, hiker or picnicker — the region’s wasp population got its sting back.

Equipped with sharp stingers, craving sugar and searching for water sources in a parched landscape, yellow jackets and paper wasps have been increasingly visible since a run of hot weather kicked in more than a week ago.

Not only are their numbers higher this summer, but wasps become more agitated in late summer and into fall, increasing the likelihood of encounters with humans, said Zack.

“They don’t like the intense heat and need water to cool off their nests where colonies have reached their maximum size. It has been a hot, dry summer and finding water isn’t easy,” he explained.

“As summer starts winding down, wasps turn from protein-based foods to sugar for a quick energy fix,” said Zack, adding that work deadlines loom as they enter the twilight of their lives.

Yellow jackets and paper wasps are the two most common wasp types in Washington state. Both populations are higher in 2018 than in the past five years or so, said wasp expert Peter Landolt, WSU adjunct faculty member of entomology.

“Though the overall number is noticeably larger, it’s still considered average because previous years’ conditions were not always favorable for our wasp populations,” he said.

Periods of cool, damp springtime weather prevented the wasps from reaching peak numbers. Then two years in a row of record warm days helped bring the numbers back up, he explained.

“Now their populations are back to normal and people aren’t used to it.”

Out with the Ouch

For most people stung by a wasp, the searing pain and localized swelling is a short-lived disturbance and a lesson in caution. Unlike bees, wasps can sting repeatedly.

But for others, a sting can trigger more severe reactions such as hives, an increased heart rate, trouble breathing and trouble swallowing. 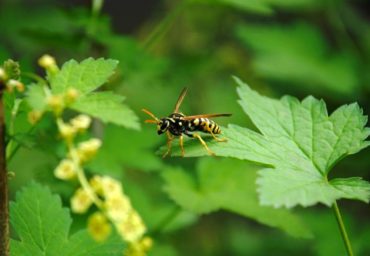 “Anyone hypersensitive to the venom should consult a doctor,” Landolt advised.

For typical, milder reactions, he recommends applying a rub-on product that contains ammonia as an active ingredient. Ammonia helps take the ouch out of the sting by counteracting acidic toxins in the venom, he explained.

To lure wasps away from humans, hang commercially sold wasp traps on the periphery of where people will congregate, Zack said. He also recommends that fallen fruit be picked up and picnic food be kept covered as long as possible.

Wasps are a nasty nuisance and sometimes even a menace. Even so, Zack and Landolt stress that these winged stingers aren’t looking for a fight but reacting defensively to perceived threats. They are also beneficial to humans and the ecosystem alike, feeding on aphids, caterpillars, flies and other insect pests that harm vegetable gardens and field crops, they said.