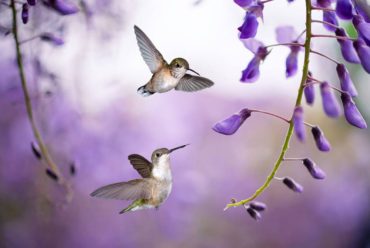 Female Anna’s hummingbirds begin building their nests in February. They will be searching through gardens in the West Sound region, looking for nesting materials.

Portions of seed pods from last year’s clematis blossoms are popular. These are the feathery tufts still clinging to the old vines. The plants flower later in the summer. Waiting to cut back the vines until the end of the month and even through March benefits nesting birds.

This tiny bird builds a nest that is about the size of a measuring teaspoon. Bits of moss, lichen, cobwebs and other materials are also woven into a structure just large enough to hold two eggs. These eggs aren’t much larger than a small fingernail.

Two hummingbirds are seen in Western Washington but only the Anna’s stays year round. The other species, the rufous, is the traveler in the hummingbird family. Their migration route can range from Mexico to Southeastern Alaska. They begin arriving in Kitsap County from late February through March.

The migration timing of the rufous hummingbird is compatible with the nesting of the Anna’s. This lack of competition for nesting territory makes it possible for both species to nest in the same area without the usual competition.

The Anna’s will have young in the nest before the rufous arrives. Once the young Anna’s fledge and leave the nest, the rufous are involved with their own nesting.

Feeding hummingbirds during the winter months wasn’t even considered until about a decade ago. Now they are an accepted part of the Northwest winter landscape. Keeping syrup feeders ready for these birds can be challenging in freezing weather but that hasn’t lessened the popularity of maintaining them. The activity around the feeders can indicate nesting progress.

Male Anna’s perform an aerial display designed to impress the females. There is both sound and action in the performance.

The displaying bird ascends into the air by shooting straight up to heights close to a hundred feet. He hovers for a moment and then dives toward the ground.

This is done so quickly that an observer can’t follow him to the end of the dive. He disappears from sight but not before making a sound difficult to miss.

Once the brakes (his tail) go on, the air whistling through those tail feathers makes a loud, ear-splitting whistle or squeak. Then, he may pause and perch on a nearby limb before doing it all over again.

While this display goes on, the female for whom it is intended sits calmly on her perch, watching but seemingly unimpressed.

After the female succumbs to the attentions of the male, the romance is short-lived. She will build the nest, brood the eggs and raise the two babies by herself.

Valentine’s Day brings courting hummingbirds and this is a signal that spring is advancing and more birds will be searching out nesting territories for this year’s crop of young birds.