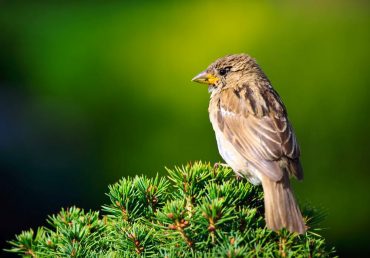 The late Roger Tory Peterson developed an identification system for birds that eventually earned him the title “dean of birdwatchers.” When first introduced, these guidelines were designed to aid in the identification of birds seen from a distance. They evolved into an all-encompassing system that allows birdwatchers to identify birds overhead, off in the distance or close to the viewer.

His numerous field guides incorporate the principles of this identification system. The illustrations for the different birds have small arrow lines pointing to a bird’s identification markings or its distinguishing characteristics. The text for each species also lists other identification factors to consider.

Where a bird is seen is one factor. Is the bird on the water? Is it feeding in a wetland? Was it seen in the mountains? Was it found in the deep forest or in an open grassland? Birds are habitat specific. They are rarely seen outside their own habitat.

Migration is one exception to the rule because the birds must travel over various terrain types on their long migration journeys. Even then, they will focus on areas that produce the habitats they need.

The spring migration that sees tens of thousands of shorebirds moving northward is best viewed in coastal estuaries. These are places where the birds can rest and feed before continuing on their long journey. Birds seen in this habitat are often in the shorebird family and it isn’t necessary to see them up close to ascertain this.

Different birds have different “field marks.” These are physical characteristics that set them apart from other birds that resemble them. Knowing these field marks is important. These markings are mentioned or marked in today’s guides but Peterson was the first to develop the practice.

The illustration for an evening grosbeak uses three arrow lines to point out identification marks that help determine the bird’s identity. Their large, heavy conical bill that is very pale is one mark. Large, white wing patches are another. Another arrow shows how these wing patches even stand out when the bird is flying.

Peterson referred to field marks as “trademarks of nature.” Learning to automatically look for things like whether or not a bird’s breast is streaked, spotted or plain is a major aid when identifying sparrow-like birds. Tail patterns, wing patterns, rump patches and wing bars aid in identifying flying birds like the Northern harrier with its white rump patch. The wing patterns for many ducks can be used to identify who just flew overhead.

Other field marks come into play when a bird is close. Eye stripes like those of the white-crowned sparrow and the golden-crowned sparrow are important to note. Eye-rings on smaller birds like the kinglets, vireos, warblers and flycatchers are often the deciding identifying factor.

The various characteristics to look for when attempting to identify a bird are learned over a period of time. They educate birders and help them focus on the bird and really see it. Running these characteristics through the mind speeds up the identification process. Go over them often enough and they become automatic.

Peterson’s identification system has been in existence since his first guide came out in the ’40s. It has been refined during those decades and is still the system other popular field guides use. When choosing a field guide for bird identification, check to see how well this system is incorporated into the book’s identification of birds.