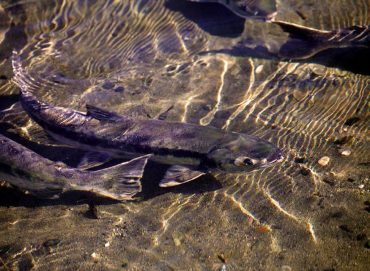 Did you know that there is treasure in the Puget Sound? Lacing the shores and in the rivers are glints of ruby red and emerald green that will catch a watchful eye. However, this is not the treasure of pirates and gemstones, but the treasure of the salmon.

Historically, the Puget Sound was full of salmon. The Native American communities that developed in this region built their culture on the backs of salmon. But as the West was settled by the newly expanding United States, industries such as logging, fishing and hydropower came and impacted the salmon runs.

Fast-forward to today and we only have a glimmer of what once was. But one of the remarkable qualities of our modern society is the ability to learn from and recover from the past. And that is what has been happening at one small creek in Gig Harbor.

Donkey Creek is located at the head of the quaint bay that Gig Harbor hugs. The creek and neighboring Austin Estuary were fertile grounds for the Native American groups, like the S’Homamish people, that frequented the area.

During the late 1800s, Gig Harbor’s economy grew from logging, fishing and boatbuilding industries. Donkey Creek was at the center of those early logging enterprises, with some of the original mill buildings still standing. The creek even received its modern name from the logging engine (known as a donkey engine) that pulled logs down the creek to the Austin Mill. 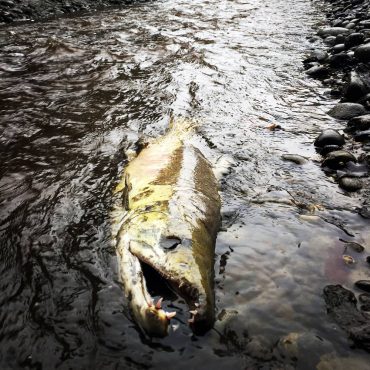 By the 1950s, Donkey Creek was squeezed through a narrow culvert after being buried under the newly constructed Harborview Drive. The chum salmon run was suffering greatly.

This is not a story about destruction, however, but reconstruction. In 1974, the Gig Harbor Commercial Fisherman’s Civic Club, in conjunction with the Washington State Department of Fish and Wildlife, started raising 1 million chum salmon eggs in a remote site incubator (RSI) system.

The RSI program was very successful and is still in operation today. But the salmon needed a healthier creek to support their growth and spawning. In 2013, Harborview Drive was rebuilt and Donkey Creek was freed from its culvert bonds. Thanks to communitywide restoration efforts, the natural creek flow is recovering beautifully and native plants are flourishing on the creek banks of this 13-acre park.

HWW: What do you think is the significance of the Donkey Creek restoration project?

Stena: It is a great example of the physical investment of the city of Gig Harbor and the community to work together to protect and restore our natural resources. For Harbor WildWatch, this expanded our opportunity to educate the public and students with salmon tours and citizen science experiences.

HWW: Can you tell us a little more about Harbor WildWatch’s Citizen Science program?

Stena: Citizen Science is exciting because it is a chance to bring people together like university scientists, high school science teachers and children and give them an opportunity to try out being a scientist. It is a great way to make science less intimidating! 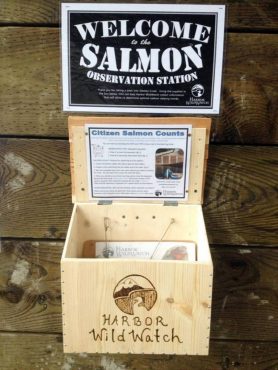 We have a wide variety of Citizen Science programs, but the main one at Donkey Creek is the salmon observation station. Visitors can stop under the Harborview Drive bridge and fill out a salmon count form. This is available during November and December when the salmon return.

Even the salmon observation station is an example of reducing and reusing. Look closely — the station is a transformed wooden wine box.

Occasionally, there is also the chance to help remove invasive plants and plant native species. It is very important for the salmon’s health to have a healthy forest ecosystem adjacent to the stream. Stay tuned for information about work parties on our website.”

HWW: How is the data from the salmon observation station used?

Stena: The data is still young. We started collecting it in 2014. The salmon observation station helps us gather information about the best time to view salmon and when to bring young scientists to the creek for field study.

HWW: Based on your observations, when would be a good time to visit Donkey Creek and see the chum salmon returning to spawn?

Stena: According to our data, Dec. 2 had the most recorded salmon observations in both 2014 and 2015. In 2015, our first sighting of returning salmon was Nov. 15. I’d expect to see fish from mid-November through mid-December. Of course, any chance you have to peek in Donkey Creek is a good time to go!

HWW: If people could learn one thing about salmon, what would you like it to be?

Stena: By taking care of the salmon, you take care of a wide range of ecosystems, like the creek, the upland forests, the Puget Sound and the Pacific Ocean. Salmon are the connection between culture, economics and the environment.

HWW: Thank you for taking the time for the WestSound Magazine blog. I have one more important question. What salmon superpower would you most like to possess?

Stena: The ability to breach out of the water, like salmon do when they jump upstream! There is a salmon run in Scotland where the fish can jump a 12-foot-high waterfall.

Harbor WildWatch will offer Salmon Tours on Nov. 19, Dec. 3 and 10. Tours are free and open to all ages. Tours begin at 9 and 10 a.m. Meet at Austin Estuary Park adjacent to the Harbor History Museum.