The ‘Secrets’ of Upwind Sailing, Explained 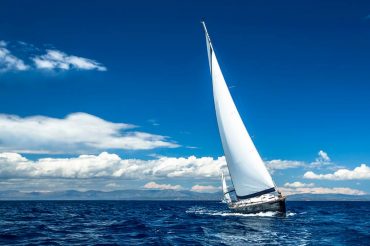 Have you ever noticed the grace and beauty of a sailboat silently moving about?

Many, many years ago, sailing vessels had square sails. They pretty much sailed in the direction the wind was blowing, being pushed along toward a destination. This worked well, as long as the desired destination was downwind from the point of origin.

But in the late Middle Ages, either the Arabs in the Mediterranean Sea or the Indians in the Indian Ocean made a technological jump that eventually led to the invention of the airplane. That was the triangular-shaped sail, called a lateen sail, which could be set such that it acted as an airfoil and allowed vessels, although inefficiently, to sail upwind.

Many generations of sail technology later, we know that the wind moves faster and in a different apparent direction (apparent because both the wind and the boat are moving). The higher the wind is off the water, the faster it moves, simply because there is friction between the wind and the water that lessens the higher you go. So the best — or fastest-sailing — sailors adjust or trim the billowing shape of their sails to take advantage of that fact.

Most sailboats today have two triangle-shaped sails. The one nearest to the bow is called the jib. It is attached continuously along a tight wire called the forestay. It is anchored to the deck at the forepeak, or bow, of the vessel and is also tightly attached to the top or head of the mast.

The jib sail size is measured by the percent it fills of the triangle formed between the mast, the deck and the forestay. For example, a 120 would be a jib that, as it extends aft, toward the stern, has a surface area 20 percent larger than the fore triangle. The jib is very important for sailing upwind because the wire forestay is so thin, it causes almost no turbulence or interruption of airflow across the jib surface.

The other typical triangular sail we see is the mainsail. It is generally larger than most jibs. It is attached securely up along the backside of the mast and also to a spar we call the boom. The boom attaches at right angles to the lower part of the mast using a swivel fitting that allows the boom to swing from side to side.

The mainsail is more difficult to trim because it is attached to the fat mast (fatter than the forestay) that interrupts the flow of air as the air approaches the belly of the sail itself.

The belly, or curvature of the sail (its shape), is critical in sailing upwind because as the air (wind) meets the curved sail, it must travel further over the curved leading part of the sail than it does to get past the somewhat hollowed out backside.

The further traveling air molecules move faster than their sisters and brothers on the backside. That causes the air pressure in front of the sail belly to be lower than on the backside so the boat moves toward that low-pressure area. None of it would be possible without a keel or center board under the boat, protruding down into the water, or without a rudder doing the same thing but also allowing the sailor to aim the boat into the wind at an advantageous angle.

It is not possible to use sails to travel directly upwind. It must always be done at an angle, making upwind sailing a zigzag affair. Without a keel or rudder, the boat would simply be blown sideways.

Really knowledgeable sailors have lots of tricks to make tiny adjustments to the shape of their sails, and thus to be able to sail faster. Take from this old sault, there is no disadvantage to being fast.

Hull shape, waterline length, vessel weight, mast height, manufactured sail shape, sail material and keel shape and placement all play a role in determining the speed potential of the modern sailboat either upwind or downwind. But all other things being equal, you can’t beat the eye, feel and judgment of a seasoned helmsman or helmswoman, which is the exalted title of the person steering the boat.

Modern downwind sailing uses a whole different set of physics, but that’s a topic for a future time.