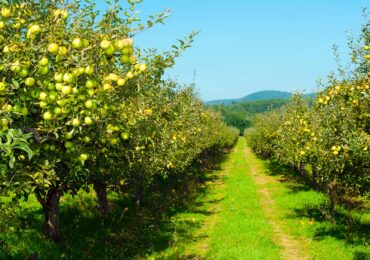 There is a difference between planting an orchard that survives and one that thrives. To create an orchard that grows well and produces quality apples, a number of considerations should be addressed before any trees are planted.

The site you chose for your orchard can mean the difference between a crop and no crop.

The most important factor is the occurrence of frosts during flowering. In a low-lying site, cold air will pool during still nights and frosts are likely to occur. A site on a hill where the air is draining down toward a lower area or a site near a large body of water that moderates the temperature will be far less likely to experience frosts during this critical period. While most of us have little choice in placing an orchard, sitting in the most advantageous position will play an important role in its success.

Soil is the basis of all life, but soils differ tremendously in their ability to provide nutrients to an apple tree.

To provide for the needs of the apple tree, the soil should contain the minerals it needs to create healthy foliage and fruit. oils are usually a combination of three basic constituents: sand, clay and silt.

Soils that are sand-based may be lacking in some of these minerals, as sand is essentially silica, and will only break down over time periods that are beyond our reckoning. In such soils, nutrients must be provided by organic matter, which is the remains of plants and animals. If the soil has little other than silica sand and stone, the task of providing enough organic matter may be difficult or near impossible.

Clay soils have advantages and disadvantages. Clays usually contain a host of minerals and are far more productive than sandy soils, but if the percentage of clay to sand or silt is too high, there can be problems with drainage and the texture may not allow easy access by the roots.

Silt soils occur where either water or wind has deposited very fine particles over centuries. Silt soils are very productive, although it’s essential that the underlying soils are well drained.

The ideal soil is a blend of sand clay and silt. Such soils can provide a wealth of nutrients and, unless they’re sitting on an impermeable layer, will have good drainage.

The best orchard soils have a high organic matter content. Organic matter is vital to growth, as its gradual breakdown releases the nutrients held within the particles and its spongy texture helps hold both air and water.

Good drainage is essential for a successful apple orchard. In poorly drained soils, the roots may be subject to long periods when the soil around them is saturated. The lack of oxygen will kill the roots. It can also create a condition where the tree roots can only exist near the surface. Shallow roots will not be able to properly support the tree during high winds, especially if there is a large crop.

How to Provide Soil Drainage

If the soil does not drain well, drainage can be provided by installing perforated drain pipes that carry away excess water. These should be located below the root zone. You can also form the land so the rows of trees are on built-up berms separated by lower swales that carry the water away. It’s obvious that such measures add a great deal to the cost of an orchard and may still not create the ideal conditions the trees need.

While less-than-ideal soils can be adjusted, such measures will add considerably to the cost of establishment.

Another soil-related issue is the acidity level of the soil. This level is measured using the pH (potential hydrogen) scale. The scale runs from 0 (think hydrochloric acid) and 14 (think lye). In this system, 7 is neutral, neither acidic nor alkaline. Apples grow best in soils with a pH of 6.5-7.0.

In acidic soils, many nutrients, such as calcium and magnesium, are chemically bound up in molecules that are not accessible by the roots. If you add ground limestone according to need, the pH can be raised over a period of years to the desired level and maintained by the addition of lime every six years or so. As the pH nears neutral, the elements are released from their bonds and become free-floating ions that are easily absorbed by the roots.

Although not as common, if the soil is alkaline, sulfur can be added to lower the pH toward neutral.

For young trees to grow to their potential, an orchard should not be planted until the pH is at the proper level.

For the homeowner, placing a few trees in a yard is not a big issue. However, if you are contemplating a larger orchard, the spacing of trees becomes very important.

Most commercial orchards are now planted in rows with trees placed around 3-4 feet apart. These trees are grafted on dwarfing roots and require permanent posts and wires to support them over the life of the orchard.

If you choose a more traditionally spaced orchard, be sure to choose rootstocks that will provide good anchorage. Even if the trees will not be supported long term, be sure to stake the new trees for one year. This will prevent rocking of the trees in wind, which slows establishment, and will keep them straighter in the row.

Rootstock for your Apple Tree

An apple tree is both the cultivar (what most people call a variety) you want to harvest and the rootstock the top is grafted onto.

Choose the rootstock you use carefully. Seedling rootstocks will vary in size, productivity and speed at which the cultivar comes into bearing.

The advantage of seedlings lies in their diversity. In a difficult winter, chances are not all trees will be affected. If you’re growing on only one type of clonal rootstock, then it all may be affected by an adverse weather event.

The advantages of a clonal rootstock are that its size, productivity and precocity (the speed at which it comes into bearing) are known factors. There’s more uniformity in the trees. There are now a large number of clonal rootstocks available, and a bit of research will be invaluable to the future of your endeavor.

Just as important as the rootstock are the cultivars you choose to grow.

There are early, midseason and late cultivars. Generally speaking, the earlier apples don’t keep as well and are often used for cooking (sauce, baking, etc.). The later apples tend to be firmer and keep better. For a family’s use, one or two early apples will be enough once they’re in full fruit. Usually, the bulk of the trees should be later ripening.

There are hundreds of available apples. Choosing which to plant is a question of taste, usage, hardiness and disease resistance.

These latter characteristics are of ultimate importance. You should choose apples that will survive your winters. Those that are injured by low temperatures will be prone to diseases such as cankers and may even be killed.

Though you will have insects to consider, the lack of fungal diseases such as apple scab, mildew and cedar apple rust will decrease the burden of protection considerably.

Everything wants to eat the apple. There is no greater challenge than producing high-quality, clean apples.

The list of insects, birds and mammals that can create challenges for the grower is long. Dealing with this assemblage of pests is what will occupy you for the life of the orchard. However, this is an exciting and rewarding time to grow apples without the use of harsh chemicals.

Here is a partial list of pests and products that can be used against them.

Naturalyte (GF 120 commercially) is a product that contains Spinosad, which is produced by soil microbes. It’s nontoxic to mammals and is used in very small quantities. Using a backpack sprayer with the spinner removed, you need only whip the wand a few times to put droplets on the underside of the leaves.

You need to do this only to every second or third tree in the row. The maggot flies that arrive in early July are attracted to these feeding stations and die after feeding on the droplets. Use a yellow plastic ball or sticky card as monitors to lure the flies. Once they appear, the product is applied. After heavy rains and every week or so, apply again until near harvest. If well applied, you will have no maggot damage.

Entrust is another product containing Spinosad. It should be applied to the trees just before flowering or shortly after. Don’t use it during flowering, as it’s toxic to bees. This will prevent the sawfly from injuring the flowers and fruit.

Larger orchards can use mating disruptors that are hung in the top of the tree. Over the season, they release a synthetic pheromone that fills the air, thus confusing the male looking for a mate. Small orchards can have cardboard bands placed on the trunks in late summer. The larvae will try to overwinter in these and can be destroyed.

There are several leafrollers that feed on new growth and the developing apples. Just before flowering, apply Btk (Bacillus thuringensis ‘Kurstaki’). This is a bacterium that only affects the larval stages of butterflies and moths. Once ingested, the insect stops feeding and dies. Repeat this in early August to insure a second generation does not develop.

Reading about the challenges of growing apples can be daunting and possibly discouraging for some, but take heart. The apple is a tough tree and will withstand conditions that are not ideal while still producing usable fruit. By trying to create the best possible situation for your apple trees, you can increase the probability you will be picking fruit you can be proud of and will keep your family happy and healthy.

Bob Osborne is the author of “Hardy Apples: Growing Apples in Cold Climates.” This post is provided as an educational and inspirational service of the National Garden Bureau and its members.