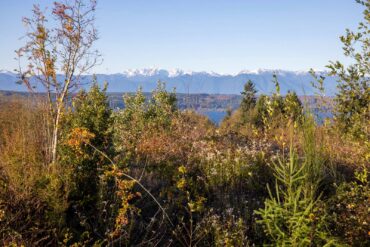 On the northern tip of the Kitsap Peninsula lies the Hansville Greenway, a 250-acre nature preserve and natural recreation area that is home to native plants and wildlife. Great Peninsula Conservancy (GPC) — the regional land trust serving Kitsap, north Mason and west Pierce counties — has partnered with the Hansville Greenway Association (HGA) and Hansville community volunteers, to launch a $2.15 million public campaign to expand the greenway by 100 acres.

GPC has secured the option to purchase the land from Disney & Associates, a high-quality private developer who recently completed The Ridge at Buck Lake, housing development. The Hansville community has whole heartedly jumped on board the effort to preserve, rather than develop, this significant parcel, according to GPC.

“The community has come together to make sure this land will be protected. Because of this grassroots effort, the land will remain open space in perpetuity,” said Nathan Daniel, GPC executive director. “The certain success of this project is a testament to the fact that people really do care about protecting ecologically valuable lands and, given the opportunity, will invest their hard-earned cash to ensure open space is protected for future generations.”

“We are a community-minded company, and we wanted to do the right thing for the people of the Hansville and for Kitsap County. We wanted to leave a long-term legacy to our commitment that demonstrates that we are a developer that isn’t just in it for the profit, but for the community,” said Bob Disney, president and CEO of Disney & Associates.

Proving that, Disney sold this prime development property, which has views of the Cascade and Olympic Mountains as well as Hood Canal, for substantially less than market value.

Early stages saw a handful of neighbors and volunteers going door-to-door to get community buy-in. In November, the first phase of the campaign was launched to secure pledges totaling $1.8 million. As volunteers worked their way through the greater Hansville neighborhoods, the word started to spread, and a week and half later, the initial pledge goal was complete.

“The Hansville community is amazing,” said Michael Szerlog, HGA president. “People here really care about the environment and like to work together on a common cause. They recognize the value of having a resource like the Hansville Greenway and support HGA’s mission to preserve natural areas and wildlife on the northern Kitsap Peninsula for the benefit of future generations.”

The 100-acre acquisition will expand the natural and recreational breadth of the Hansville Greenway. The land provides important habitat for seasonal bird migration, including a nesting and breeding spot in the spring, GPC said.

Large, old-growth stumps, now serving as fruitful nurse logs for the next generation of mature forestland, can be found along the trails. Surrounded by housing developments, rural home parcels and managed forest lands that are occasionally harvested, the trails traverse second-growth forest frequented by locals and visitors in search of a peaceful place to run, hike, mountain bike, ride a horse or observe the native habitat.

“As a long-term resident of Kitsap County, I strongly believe in the preservation of open space not only for the residents of this county, but for my own family as well,” Disney said.

The company has included open space, which could have been developed, as part of every development it has ever built. “We derive a great deal of satisfaction in giving back to the community that has supported us, and hopefully, our actions demonstrate that,” he said.

Introducing neighbors to this property has been part of generating interest for donations. Residents from Hansville and across North Kitsap have turned out to get a chance to hike the land.

“The group tours have validated part of our intended mission, to connect neighbors, in a very strong way. So many people have turned out for the hikes and new friendships were formed on the spot. It has been really special to see this part of our vision already happening,” said BryAnn Bingham, who was part of the early efforts to organize and seek donors.

The second phase of the campaign is nearly complete to raise the remaining funds, which includes $75,000 in seed money for restoration costs. Once purchased, the property will be owned by Great Peninsula Conservancy, with stewardship provided through a partnership with the Hansville Greenway Association and the greater community. Together, this group will work to develop a restoration plan and establish a network of trails that connect to the existing Greenway trail network.

Learn more and donate to the campaign at greatpeninsula.org.