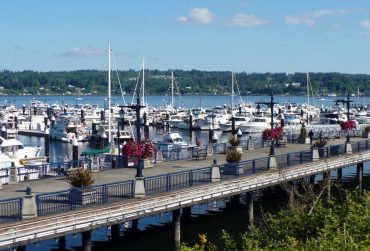 Now in its fourth year, the Rock the Dock concert series on the Louis Mentor Boardwalk at the Bremerton Marina kicks off with a bang on July 4. This summer’s entertainment line-up features 16 special performances over eight nights that encompass a wide musical spectrum and even includes salsa lessons.

The lineup of local and regional talent has something for all music tastes, from folk to country, pop, jazz and good old rock ‘n roll.

In recent years, the Port of Bremerton and the Downtown Bremerton Association have made significant investments in the stage, lighting and sound system. This, combined with the beautiful marina that can accommodate up to 100 visiting boats and the gorgeous waterfront setting, makes Bremerton Boardwalk one of the finest outdoor music venues in the Puget Sound.

Kicking off the free concert series and pulling out all the stops is a special Independence Day celebration with five hours of unforgettable music from four bands and a first-class, front-row seat to the Sinclair Inlet Fireworks Show.

The evening includes a headline performance from a Prince tribute band featuring classic Prince songs from his ultimate collection. The party starts early at 4 p.m. when the beer garden and food trucks open and runs all the way until the twilight’s last gleaming, followed by the spectacular fireworks show at 10:30 p.m.

The Saturday night concerts are from 5 to 8 p.m. (with the exception of Monday, July 4). Food vendor/trucks and the beer and wine garden open at 4 p.m.

More Details About the Performances