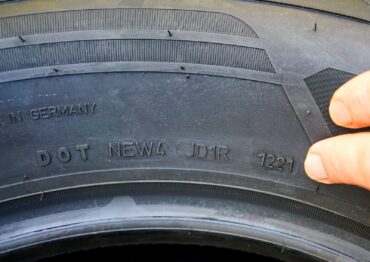 There have been a number of things recently that have prompted me to look into the use of Department of Transportation (DOT) numbers on tires: a recent purchase of a used car with seemingly sound tires and a four-wheel-drive SUV that racked up 80,000 miles on a set of factory tires. In either case, knowing about DOT numbers goes a long way in resolving the mystery.

In the first case, the tires looked new but, in fact, they were nearly 30 years old. The reason that the tires on the SUV wore so well was due to the fact that the tires were five years older that the new vehicle they came on (they were hard due to their age).

The U.S. Congress established the DOT in the 1960s. The DOT was tasked with establishing standards for vehicles used on Americas highways and that included standards for tires. DOT numbers on tires provide two critical bits of information: where the tire was manufactured and when.

The DOT has established a useful life of a tire to be between six and 10 years. For many in the hobby, the rule of thumb has been if it holds air and has tread, you’re good to go. And for cars that may not see freeway speeds, there may be some latitude (at your own risk).

If you go on long-distance tours, this attitude may come back to haunt you. Please allow me to explain. Dry rot and tread separation can be a serious problem, often showing no visible signs. Most tire shops are well aware of the DOT tire life standards and will not service a tire beyond a certain point. It’s good for business and keeps them from getting sued. They could be liable for sending you down the road with a tire the DOT has deemed unsafe. It would not come as a surprise to learn that the tire manufacturers have also baked that specification into their process.

The Nuts and Bolts of It: What the Numbers Mean

The DOT number, also known as tire code, can be anywhere from 7 to 13 characters, grouped into three sets. If there’s no DOT number, it means the tires were manufactured prior to 1960.