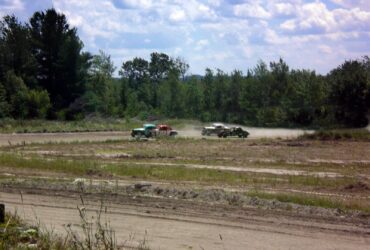 Inevitably as you go through life, you have regrets — things you did or things should have done often come to mind. As a young lad, attending Junior High School in Silverdale, I often heard the roar of engines coming from Silverdale Speedway, but never thought to investigate. Many years later, after having met a number of folks who were part of the sights and sounds of Silverdale Speedway, I would come to appreciate what actually happened there.

This story begins as John Emel established a dirt track on a 40-acre parcel (sometime around 1913 or thereabouts) so that he could have a venue for horse racing. The site was a multiuse facility with athletic fields in the center. He was probably better known for his large building in Old Town Silverdale, site of the Old Town Tavern for many years.

In 1928, the property was sold to Joe Yoder, who would host stock cars and motorcycles on this little 3/8-mile oval. This racing venue would attract drivers from all over the Northwest, often hosting 20 to 30 cars.

During the World War II, that 40-acre parcel was designated by the Navy as an emergency landing area. Sort of a last resort if the other local fields were fogged in.

Sometime in the mid-1970s (’74-’75 timeframe,) the property was sold to the Central Kitsap School District. That would signal the end of a track and the era in local motorsports.

From what little information I can gather, the first thing the school district did with the property was to put in a bus barn. This remained its function for a number of years before the property underwent a major remodel.

There are few places in Kitsap County that have undergone a more dramatic change than the area where the new Central Kitsap School complex sits. After spending quite a bit of time pondering over plot maps both new and old, I believe I have located the area where the track once was. It’s now a baseball field on the northeast corner of the school district property. It sits at the end of Ballard Lane, just south of Highland Court.

So it seems the circle has been completed, starting with horse racing and athletic fields, moving to motorcycles and cars, becoming a bus barn and now once again an athletic field.

It’s interesting to note that a number of OVAC folks raced and crewed on this little track. Sig Chrey, Gary Watland are among those I know about. Ron Hoff was a crew chief there also. My apologies to anyone who I may have left out.