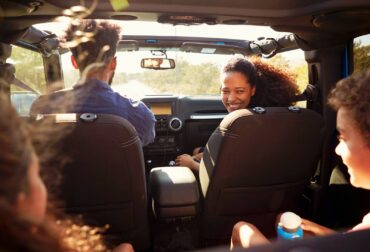 Buying or leasing a new vehicle involves plenty of planning and consideration. You think about what features you’d like to add, like self-parking technology or heated seats. And you ask how your needs might be changing, which could mean moving from a compact to an SUV or from gas to electric.

According to the latest Hankook Tire Gauge Index, nearly two-thirds (62 percent) of Americans would change something about their current vehicle, such as the size, safety features or even the color. So what are the biggest drivers for Americans entering the new vehicle market?

The most important feature for Americans looking at new vehicles is safety, with nearly a quarter saying that a new vehicle has to protect them and their loved ones. That’s especially true for women, who place a higher premium on safety than men when choosing a new vehicle (30percent vs. 18 percent).

A great way to ensure that a new vehicle will offer the best protection is to research safety ratings from both the National Highway Traffic Safety Administration (NHTSA) and the Insurance Institute for Highway Safety (IIHS). Both organizations test and rate the most popular vehicles on the market and provide independent, detailed reports on how they perform in a variety of accident scenarios.

2. Saving at the Pump – and the Socket

A close second to safety is fuel efficiency, with good mileage ranking as the most important element for 23 percent of Americans when choosing a new vehicle. It’s also important to consider both city and highway fuel economy, and make a decision based on the most likely type of driving that will be done.

Efficiency isn’t just for gas-powered cars, either: Electric mileage is just as important for drivers shopping for new electric vehicles (EVs) and hybrids. The Environmental Protection Agency offers an informative section on its fueleconomy.gov site to determine not just what an EV’s range is, but the equivalent annual costs in electricity.

With so many consumers focused on the efficiency of their next vehicle, it’s no surprise that over half of all Americans (52 percent) either currently own or lease a hybrid or EV (18 percent), or plan to in the future (34 percent).

This trend is already growing, especially among younger drivers. Most millennial (69 percent) and Gen Z (71 percent) respondents either already own or plan to own or lease a hybrid or EV. Hybrids and EVs are also popular among Americans living in the western part of the country (65percent). That’s likely because of new regulations, such as California’s plans to phase out gas-powered car sales by 2035.

4. Gearing up with Gadgets

It can be hard to choose from the assortment of bells and whistles available on the newest vehicles, but for many Americans, there’s a clear list of must-haves. Backup cameras were the top necessity for 29 percent of Americans, followed by Bluetooth connectivity (16 percent) and blind spot detection technology (14 percent).

Not all tech is a must-have, though. Only 6 percent of respondents said they would consider self-parking technology as a necessity, and 15 percent said they don’t have any technological deal-breakers when looking at new vehicles.

That could still change: After all, backup cameras were introduced to the United States in 2002, and have quickly become the top choice for in-car tech.

Thinking outside the Cabin

Hankook Tire asked Americans what unusual feature they’d love to have in their vehicles, and 38 percent said they would add a refrigerator while 19 percent would take a coffee maker. That brings a whole new meaning to a cup o’ joe to go!

5. Sticking with What Works

As the saying goes, if it ain’t broke, don’t fix it. And for 34 percent of Americans who wouldn’t change anything about their current vehicle, that holds true. So when this group of Americans need to buy or lease a new car, it’s likely that they’ll stick with what they know and like, including body style, color and features.

That’s less so for younger Americans, though. Just 18 percent of Gen Z and 20 percent of millennial respondents are happy with what their current vehicle provides, compared to 49percent of boomers and 56 percent of silent generation Americans. As they get older and gain more purchasing power, millennial and Gen Z drivers may be making a move for the features they want in a new vehicle.