I call it the Super Mom effect. You know that moment when you come home tired after a long day and, bam! There it is. Dinner. Cooked and simmering away on your counter because you had the foresight to throw a few ingredients in the slow cooker on your way out the door that morning.

You are a superhero — you can get dinner done while you’ve been gone all day. The Super Mom effect. It’s real, and it makes you feel good inside. 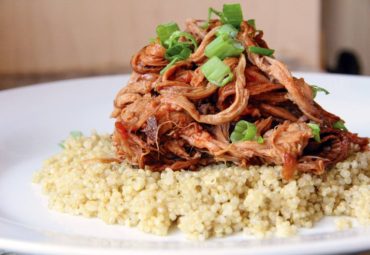 We’re big fans of pork tenderloin in the slow cooker. You don’t have to brown it first — you just stick it in first thing in the morning, add your liquids, cover and cook on high all day. That’s it! By the end of the day, you have the most tender, ready-to-eat supper around.

I’m telling you, pork cooked in the slow cooker is the best! On some evenings, we serve our pork over quinoa, but you could serve it on buns as a sandwich, over a baked potato, over rice or over anything you want — or just eat it by itself. The apple cider gives the meat just a hint of fall flavor, and then we finish it off with chopped green onions.

This meal looks fancy enough to serve to guests but is simple enough for even your busiest weeknights.

Place the tenderloin(s) in the bottom of the slow cooker and then add 6 cups of apple cider. Cover and cook on high 6 to 10 hours (the longer, the better).

About 30 minutes to an hour before you’re ready to eat, remove the lid and pull the meat out and into a bowl (it will be so tender that it will fall apart immediately). Drain all of the liquid from the slow cooker. Place the meat back in the empty slow cooker and shred the meat using two forks. Next, add the ketchup, mustard, Worcestershire sauce, and remaining two cups of cider. Cover and cook on low for another 30 minutes to an hour.

Meanwhile, if you want to serve this over quinoa, add the rinsed quinoa and chicken stock to a small pot over medium-high heat and bring to a boil. Once it begins to boil, cover, reduce heat to low, and simmer for 15 minutes. (Do not remove the lid while it’s simmering.) After 15 minutes, remove the lid and fluff with a fork. Drizzle in just a tiny bit of olive oil or a tablespoon of butter, and a nice pinch of salt and pepper. Serve the shredded pork tenderloin straight from the slow cooker over the quinoa. 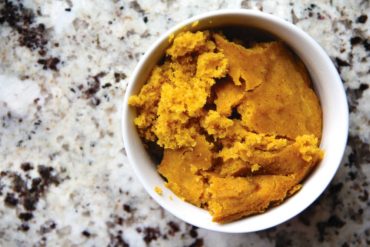 Here is a yummy pumpkin cake that smells and tastes just like fall, cooked up in my slow cooker.

This recipe serves four to six.

Mix all ingredients with an electric mixer and then spread in the bottom of a greased slow cooker. Cover and cook on low for 2 to 3 hours. Remove the lid and serve.

A wife, mom, author and entrepreneur, Shay Shull writes about motherhood, adoption, world travel and, of course, yummy food on her Mix and Match Mama blog. She is the author of five books including and has been featured on national television shows including The Today Show, Hallmark’s Home & Family, and Fox & Friends. Shull lives with her husband and four children near Dallas, Texas.