Start the Grilling Season Right with these Bacon Cheeseburgers 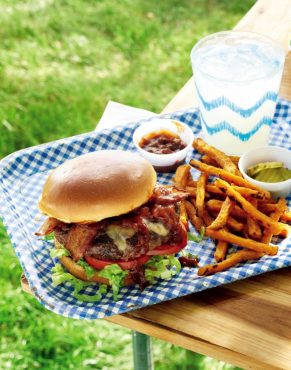 According to New York Times best-selling cookbook author Jamie Purviance, one of the top trends in barbecue today is a movement toward more individual expression.

“It used to be that barbecue styles were determined by regions, but in our internet-connect, melting-pot nation, those regional styles are evolving,” says Purviance, chef and author of the newly released book “Weber’s New American Barbecue.” “Younger grillers are blending old-school methods with fresh flavors to come up with unexpected food riffs, including Boston bacon fatties and baby back ribs with blueberry-chipotle barbecue sauce.”

Try Purviance’s Bacon Cheeseburgers with Kentucky Bourbon Sauce to add some new school excitement to your next backyard barbecue.

Soak the wood chips in water for at least 30 minutes.

Warm the oil in a heavy, medium saucepan over medium heat on the stove. Add the bacon strips and fry until browned and crisp, 3 to 5 minutes. Using a slotted spoon, transfer the bacon to paper towels to drain and cool, leaving the drippings in the saucepan.

Add the onion to the saucepan, reduce the heat to medium-low, and cook until soft and golden brown, 8 to 10 minutes, stirring occasionally. Stir in the garlic and cook until fragrant, about 1 minute. Add the bourbon, increase the heat to medium-high, and boil to reduce slightly, about 1 minute. Add the remaining sauce ingredients and bring to a boil over medium-high heat. Reduce the heat to low and simmer, uncovered, until the mixture thickens and is reduced to about 2 cups, about 20 minutes, stirring occasionally. Turn off the heat and stir in the fried and cooled bacon. Cover and keep warm.

Meanwhile, in a skillet over medium heat on the stove, fry the eight bacon slices until browned and crisp, 8 to 10 minutes, turning occasionally. Transfer the bacon to paper towels to drain.

Mix the ground chuck, salt and pepper, and then gently form four patties of equal size, each about 3/4-inch thick. With your thumb or the back of a spoon, make a shallow indentation about 1 inch wide in the center of the patties to prevent them from forming a dome as they cook. Refrigerate the patties until ready to grill.

Prepare the grill for direct cooking over medium-high heat (about 400 degrees).

Drain and add the wood chips to the charcoal or to the smoker box of a gas grill, following manufacturer’s instructions, and close the lid. When smoke appears, grill the patties over direct medium-high heat, with the lid closed, until cooked to medium doneness (160 degrees), 8 to 10 minutes, turning once. During the last minute of grilling time, place one-quarter of the cheese on each patty to melt and toast the buns, cut side down, over direct heat.

Build each burger on a bun with lettuce, tomato slices, a patty, bacon slices and sauce. Serve warm.