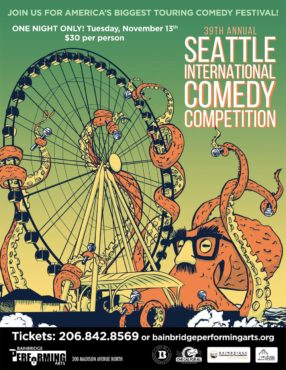 Past winner Tommy Savitt, aka the questionable guru Tommy Lama, will emcee. The 39th Annual Seattle International Comedy Competition started Nov. 1 and continues nightly at venues throughout the region until a winner is crowned on Sunday, Nov. 25, at the Comedy Underground in Seattle.

It’s America’s biggest touring comedy festival: 25 days, 20 shows, a host of Venues, 32 comedians and over $15,000 in cash and prizes. Talent executives, managers, agents and producers from networks like CBS and NBC and from movie studios are always in attendance.

There are two “preliminary” rounds of 16 comedians; each comedian gets five minutes to impress. Each preliminary round consists of five shows, and a combination of entertainment industry and celebrity judges and audience reaction determines who moves on when all the scores are tallied. The top five comics from the two preliminary rounds make the semifinals; all the semifinalists win some cash and get to compete for the title by performing for 10 minutes nightly for five shows.

Tickets for the BPA show are $30 per person and may be purchased online at bainbridgeperformingarts.org, by phone at (206) 842.8569 or in person at BPA, 200 Madison Avenue North, Bainbridge Island. Box office hours are 1 to 4 p.m. Wednesday through Friday, and one hour prior to each performance.