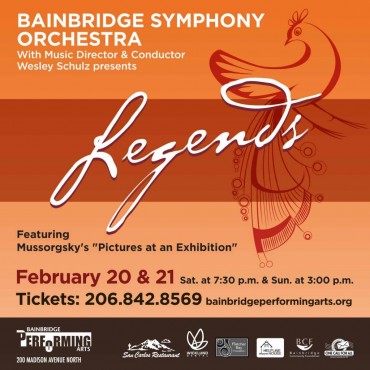 I have a brother, Joshua, who is two and half years older than me. Like many mischievous older siblings, he was prone to dupe his younger brother (me) into doing silly things or believing tall tales.

One time, my mom threw away some Batman and Robin themed rubber placemats. We pulled them out of the trash and my brother cut them up into masks. He handed me a red cape, put a black one on himself and we proceeded to walk around the neighborhood looking for crime.

I believed him when he said everyone would think we were cool. We were cool. He also told me stories: legends and folktales.

One in particular was the Man on the Moon. I would peer up at night and Joshua would gleefully point to the Man on the Moon, who was supposedly right there in front of my very own eyes. Yet, no matter how contorted my eyes and scrunched my face, I couldn’t see him. I believed my brother though, because older siblings are usually older and wiser.

On Feb. 20 and 21, the Bainbridge Symphony Orchestra will perform a program titled “Legends.” There are no superheroes (or youngsters hoping to be superheroes) but we do have a program packed with musical works that involve a fantastical, mythical or legendary story backdrop.

Some works, like Stravinsky’s Berceuse and Finale from “The Firebird” and Tchaikovsky’s ballet “Swan Lake” are about mythical creatures.

Stravinsky, in collaboration with Sergei Diaghilev and his Ballets Russes, gives us music that helps tell the fairy tale involving a magical firebird, Prince Ivan, a beautiful princess and an evil sorcerer named Kashchi.

“Swan Lake” involves a similar crew of mythical birds, evil curses and prince and princesses. The difference between this ballet and Stravinsky’s is that “Swan Lake” ends in tragedy.

The Bainbridge Symphony Orchestra is pleased to welcome dancers from Olympic Performance Group who will join us on stage for selections of “Swan Lake.”

Jean Sibelius celebrated his 150th birthday in 2015 and the Bainbridge Symphony Orchestra belatedly marks the occasion with a performance of one of his early works: the “Overture to Karelia.”

One of the most important cultural documents of Finland as well as the people of Karelia is the epic Kalevala; a collection of oral myths and folklore that was assembled in the 19th century by Elias Lönnrot.

Sibelius was inspired not only by this poetry but by folk music and the people he met as he traveled around his country. When Finns first heard his “Finlandia,” “Kullervo” as well as the “Overture to Karelia,” they embraced Sibelius as the creator of their national music.

The final piece on the program is not inspired by a fairytale but it is a work shrouded in myth and legend. Modest Mussorgsky wrote a suite for piano in the late 19th century that made little impact at the time. The writing for piano was awkward, few knew the work existed, and the music wasn’t published until the 20th century, after Mussorgsky had died.

It took another composer, Maurice Ravel, to make the piece famous with his orchestration, creating a worldwide sensation and masterpiece in its own right. The work, “Pictures at an Exhibition,” is so famous as a piece for orchestra that many mistakenly attribute the orchestral transcription to Mussorgsky.

The original piano piece was inspired by a visit to an exhibition of the paintings and architectural drawings of the late Victor Hartman. Many deal with fantastical creatures and places, such as Baba Yaga and Bydlo, making the work at home in the program.

We all have stories to tell as we create new stories every day. Whether yours are from an ornery sibling or from beloved tales found in books, they are all spellbinding. Join us as we celebrate legends and the music they inspired by our greatest composers.

Wesley Schulz is the music director and conductor of the Bainbridge Symphony Orchestra.
Tags: entertainment, music, musician, news, northwest, people, things to do