As the seasons shift from summer to fall, you can begin looking forward to warm flavors and fresh inspiration. Below are two recipes from the Wilton Test Kitchen, which created new takes on favorite comfort foods inspired by the 2015 Baking and Decorating Trend.

Middle Eastern and North African flavors have become increasingly popular ingredients in baking and other sweet treat making. Wilton’s Cinnamon and Aleppo Pepper Braided Loaf recipe is reminiscent of classic cinnamon bread, but served with a side of sass as it weaves in a mild, almost citrus-like heat with Aleppo peppers.

For dessert, tap in to the “fruitful possibilities” trend with this Hard Apple Cider Tart. The tart plays up crisp, light apple flavor with a refreshing bite of hard cider. Produce sections are piled high with ever-expanding selections of fruit. Each type boasts its own signature flavor, texture, fragrance and color. 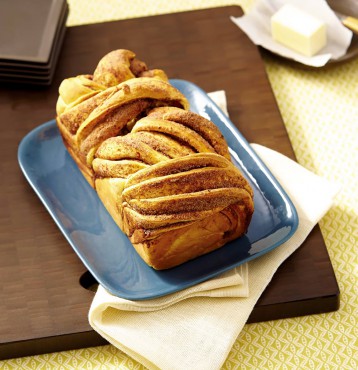 Roll dough into 20-by-12-inch rectangle. Spread filling evenly over dough surface. Roll up from long end as for cinnamon rolls, pinching seam and ends to seal. Cut log in half lengthwise. Twist pieces together and place in prepared pan in “S” shape, tucking ends under. Cover pan and let rise in warm area 15 minutes.

Uncover loaf and bake 30-35 minutes or until loaf is golden brown and sounds hollow when tapped. Let cool in pan on cooling grid 5 minutes then turn out onto grid to cool completely. 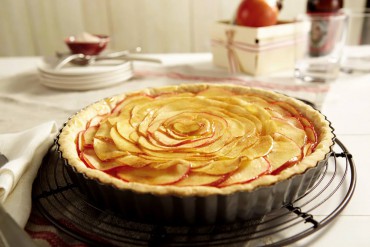 In large bowl, stir together melted butter, sugar, vanilla and salt. Add flour; stir until just combined. Evenly press into bottom and up sides of pan. With fork, prick dough all over. Refrigerate 30 minutes.

In small bowl, combine sugar, cinnamon and salt. Arrange apples in tart pan in overlapping circular pattern, working from outside in. Sprinkle with cinnamon sugar mixture.

Bake on cookie sheet 55-60 minutes until apples are soft and crust is golden brown.

While tart bakes, make glaze. In large skillet, cook cider over medium heat until liquid has reduced to 2 tablespoons, about 10-15 minutes. Reduce heat to low; add corn syrup and sugar. Stir continuously until sugar has dissolved. Remove from heat and cool.

Rewarm glaze over low heat, if needed, and brush on tart when it is removed from the oven. Cool tart completely in pan on cooling grid.