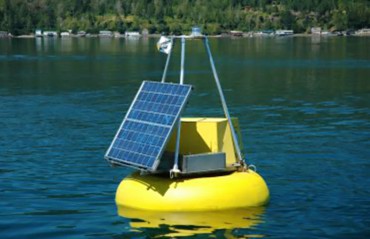 NOAA, the National Oceanographic and Atmospheric Administration, part of the U. S. Department of Commerce, has deployed many distinctive, yellow data-gathering buoys globally. Six of them, all technically owned and managed by the University of Washington for NOAA, are located in Puget Sound. Five of those are in our West Sound region.

Here’s a list of the buoys along with their official identity numbers and general locations. They are part of what is called The ORCA Project.  Here’s how NOAA describes it:

“The Oceanic Remote Chemical Analyzer (ORCA) is an autonomous moored profiling system providing real-time data streams of water and atmospheric conditions. It consists of a profiling underwater sensor package with a variety of chemical and optical sensors, and a surface-mounted weather station, solar power system, winch and custom computer and software package equipped with WIFI/cellular communication.

“Since its deployment in 2000, the ORCA system has provided a near-continual stream of high-resolution water quality data from locations in Puget Sound, Washington state. There are currently six such systems deployed around Puget Sound including Hood Canal.”

The five West Sound sites are:

You can go to NOAA’s National Data Buoy site at www.ndbc.noaa.gov and see the data record for dozens of reporting buoys and land-based recording sites, including, by buoy number, the sites listed above.

Here, in boring detail from the buoy website, are detailed descriptions of many of the data elements recorded.

Additionally, it is possible to phone certain buoys to get up-to-the minute data. For example, there is a buoy located just off Tatoosh Island near the entrance to the Strait of Juan De Fuca. Its identifier is TTI W 1, and if one were to call 888-701-8992 and enter the identifier, a recording of that buoy’s recent wave and weather experience is played, and an option to also hear a weather forecast is offered.