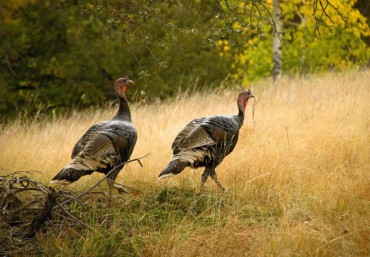 According to Benjamin Franklin, the wild turkey would have been a more fitting symbol for our young country than the bald eagle.

Franklin thought the eagle a “good-for-nothing” scavenger. The wild turkey, on the other hand, was intelligent, a formidable opponent and able to survive on its own labors.

The rest of Congress didn’t see it his way and the turkey wasn’t about to become our national bird. However, maybe old Ben won the argument anyway. The turkey definitely reigns as a national bird this month.

It’s almost a secret but wild turkeys do exist in the state of Washington. Their history is an interesting one.

They are not a native species and were introduced sometime before 1913. The first releases weren’t successful but in 1961 a sustainable population took hold. This was in Stevens and Klickitat counties.

In 1984, the Department of Fish and Wildlife increased its efforts to introduce even more birds. Three different subspecies were transplanted from Texas, South Dakota, Pennsylvania, Missouri and Iowa.

Wild turkeys are very different from their cousins that will grace Thanksgiving tables this month. They are a challenge to hunt and for that reason, turkey hunting is popular.

Wild turkeys are more abundant on the eastern side of the state but they exist in small numbers on the west side too. The birds are thriving in the Blue Mountains and in Klickitat County. Their population is the greatest in oak and ponderosa pine habitat like that found in Stevens and Lincoln counties.

Several decades ago, an attempt to introduce turkeys to Kitsap County took place on the military installation at the Bangor sub base. A contingent of birds was released with the hope they would thrive and multiply in the protected setting.

Sightings of turkeys, even some with young, were reported for several years following the release. The wet climate wasn’t for birds that thrive in a drier environment and eventually they disappeared.

Turkey hunting in Washington illustrates how successful the introduction of the birds has been. Most of the birds harvested come from Eastern Washington but they are also hunted on the western side of the mountains. Southwest counties account for a portion of the 2,000 or more birds taken statewide.

The San Juan Islands are one of the best places to look for turkeys on the west side of the state. They are protected from hunting and their abundant numbers have become almost tame.

The drier climate found in the islands suits them. Wild turkeys in these islands are even considered a tourist attraction. If you go online looking for things to see and do while vacationing in the San Juans, you will find several sites that mention these interesting birds.

Benjamin Franklin may have disliked the bald eagle but this was one time Congress got things right. Our national symbol being served all across the country on Thanksgiving just wouldn’t seem right.