Walking gingerly, I trained my eye for the golden color that is so easily mistaken for leaves or bare sticks. It was early September, and there was a recent rain, so my mother and I were out on the mossy slopes of a fir forest in search of chanterelle mushrooms.

I watched for moss pieces being pushed up by a mushroom cap. I paid particular attention to moist areas in dense forest without much underbrush.

When one chanterelle is spotted, others are likely nearby. When I find a chanterelle ready to be picked, I carefully pulled back anything covering it, cut it close at the base, and clean off remaining debris before adding it to my stash.

Most simply, they make great snacks when sautéed in a bit of salted butter. They are well paired with chicken, eggs, risotto, pasta, soups, pizza or stir-fry. They’re easily distinguished once familiar, but foragers should never take risks with unknowns.

The history of logging in this area has resulted in vast amounts of forests that are the perfect age for chanterelle habitat. Mushroom hunting usually consists of a casual meander through the woods, packing pocketknives and cloth bags. I’ve likened it to Easter egg hunts for adults. I forage with a gambler’s addiction, so even a little bit of success keeps me searching with no sense of time.

Chanterelle hunting has become my birthday tradition. It’s fun for everyone, and we can get along because we’re doing the same thing in separate parts of a forest. It’s good, clean fun with a little bit of dirt.

This year my harvest started earlier but the rain has been scarce. The first chanterelles behind my house appeared July 31 – almost two weeks earlier than the year before. The weather’s been dry and the mushrooms have become leathery, if usable at all. But having just rained, we found a few and left many small mushrooms to grow.

Although usually uneventful, the occasional mushroom hunt has surprised us. Once I looked up from picking a chanterelle to find an Oregon black truffle resting atop a fallen log. I confirmed its identity and used it to infuse a tiny cup of olive oil.

Another time, we found a live chicken in the woods, seemingly abandoned and far from civilization. Assuming it was a pairing suggestion from the culinary cosmos, we caught it and brought it home, hoping it would lay some eggs.

Autumn rains become fun for a foodie anticipating chanterelles. Alan Davis, of Scout Café and Honor Bar near Evergreen Park in Bremerton, said he likes to use chanterelles on rotating autumn menus. Roasted chanterelles with braised leeks go well together in a warm salad. Sometimes, if there’s an abundance, he lightly pickles chanterelles to let the earthiness and acidity complement a rich rib-eye steak.

If you want to learn about wild mushrooms, the Kitsap Mycological Society hosts an Annual Wild Mushroom Show, which will be Oct. 26, 1-5 p.m. at the Silverdale Community Center.

David Arora’s pocket guide, “All The Rain Promises and More,” is also a handy companion. If you’re going out for the first time it’s wise to have a guide, but don’t expect even the best of friends to share their secret spots with you. 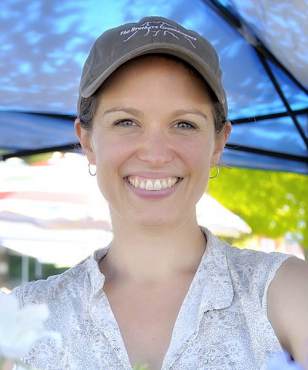 A farmer with her family at The Brothers Greenhouses and the Davis Farm, Elise Watness is dedicated to connecting local producers and eaters both through farmer' markets and online with Victory Garden Media. Elise is also a Montessori teacher and studied ethnoenvironmental journalism and Spanish at Western Washington University. She has a passion for travel... (see more by Elise Watness Maupin)