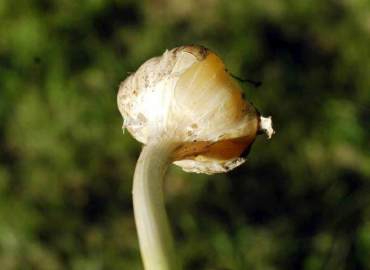 I love “Aha!” moments. I recently had one regarding the mysteries of garlic in storage.

I had noticed that some years, my garlic stored without any trouble, lasting well into the summer, while other times many of the cloves shriveled up and were unusable. I could not pinpoint the cause until the garlic harvest this year.

I pulled my garlic on a lovely sunny day and left it in the garden to dry before cleaning. I intended to clean it the next day, once it had dried a bit, but life got busy.

The sunny days continued, heated up, and there my garlic remained. I only remembered that it was out there a week later, as it was getting soaked by some much needed rain. 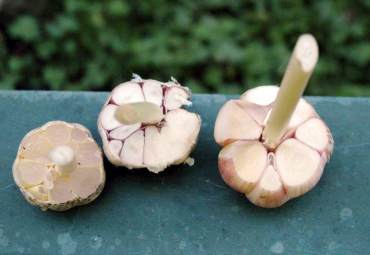 As I was cleaning the bulbs a few days later, the afternoon sun backlit the cloves and made them glow like the agate stones found on our beaches. Some of the cloves glowed with that amber glow, and some did not.

When I broke the garlic head apart, the difference was quite apparent. Some of the cloves were partially amber and partially white, while the rest were solid white, as one would expect.

I searched the internet for an explanation and found very little. The Oregon State University came through with their description of this physiological phenomenon, calling it “waxy breakdown of garlic.” The suspected cause is excessive heat during growing or harvest.

Another source of interest is from the International Produce Training Program. 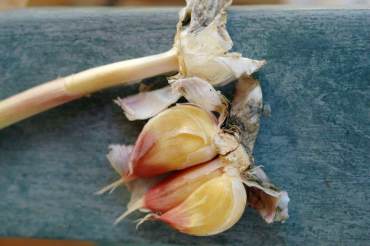 Based on my observations this year, high temperatures (in the upper 80s) during drying in the field were responsible. Many heads were unaffected and some had only a few cloves turn amber, while others were affected completely. I believe the degree of waxy breakdown in my garlic was dependent on the garlic’s placement while drying, either on the top of the pile, getting all the heat and essentially baking in the sun, or deeper down, shaded and protected from the heat.

I baked the cloves of waxy garlic with good results. The taste was not really altered, though the aroma as I peeled it was quite strong, as baked garlic might be. Roasting the rest of this garlic and freezing it right away could be a way to preserve at least some of my affected harvest.

Garlic that has undergone waxy breakdown will not keep well and will shrivel up in storage. It is also much more prone to various fungal diseases in storage as a result of not curing properly.

The owner of Harmonia Landscapes on Bainbridge Island, Luba Fetterman is an ecoPRO certified horticulturist. Whether designing a garden, teaching clients how to care for their own landscapes, or providing fine pruning or maintenance services, Luba's focus is on gardens that nurture people while remaining in harmony with the natural world. She has a bachelor... (see more by Luba Fetterman)