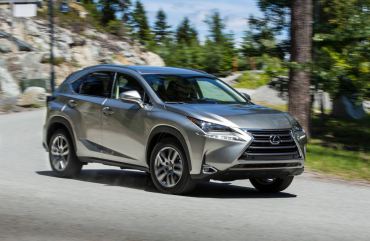 In 1998, Lexus created the luxury-utility crossover segment with the debut of the original midsized RX, and is looking to take the lead again the growing compact segment with the all-new 2015 NX.

Following the route of the Lexus GS and IS sedans, the 2015 NX introduces enticing design to a segment known for its unimaginative, boxy offerings. The bold interpretation of the signature Lexus spindle grille, inspired by performance vehicles, features the 2015 NX uniting the engineering input of racers with the Lexus’ renowned luxury in design.

The 2015 Lexus NX debuts in two versions, the NX 200t with a turbocharged 2.0-liter four-cylinder engine and the NX 300h hybrid, which brings the brand’s number of hybrid offerings to six — the most of any luxury brand. Both NX models offer their own version of pro-active all-weather drive (AWD).

The hybrid also offers a new transmission with a kick-down function — something singularly unique for a hybrid. The racers influence is showcased by their insistence on splitting the hybrid battery into two separate pods for better weight distribution — which had the additional benefit of a more efficient use of cabin space.

Looking more sports-car than SUV, the 2015 NX’s cabin offers new, onboard, standard and available technology, including a Lexus-first Wireless Charging Tray for compatible phones and devices; the new Lexus Remote Touch Interface (RTI) with a touch pad; and a comprehensive multi-information display that features a Lexus-first G-Force meter and boost gauge.

The 2015 Lexus NX debuts with two powertrain choices — each with front-wheel drive or all-weather drive:

To conserve fuel, the system uses front-wheel drive during normal cruising. When required, it automatically engages AWD through an electromagnetically controlled coupling in the rear differential housing, directing up to 50 percent of available torque to the rear wheels. When the driver makes too wide of a turn, the Dynamic Torque Control AWD helps bring the vehicle back to the intended drive line.

The Lexus E-Four proactive all-weather drive system in NX 300h hybrid uses an electric motor to drive the rear axle, while the front axle is propelled by gasoline or electric power, or a mixture of both. The sophisticated E-Four system varies torque distribution to the rear wheels, depending on driving dynamics and road conditions, and provides some rear-wheel torque at start-off to minimize chance of wheel-spin under acceleration and on slippery road surfaces. E-Four saves energy and fuel, because the vehicle only uses all-wheel drive when needed. When the system detects loss of traction of the front wheels it reduces the electricity supply to the traction motor in the transaxle and increases supply to the rear-axle motor. The rear motor acts as a generator when the NX is in regenerative braking mode, increasing the amount of kinetic energy recovered.

The F SPORT designation on a Lexus tells you to expect a performance driving experience — the modus operandi of the NX F SPORT — which looks a bit sinister with its more aggressive grille and front lower bumper. Special wheels, black exterior mirrors and exclusive interior trim and front sport seats round out the package.