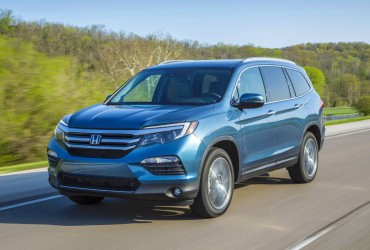 Overview: The 2016 Honda Pilot is no longer that awkward-looking box. The all-new version is rounder, prettier, longer, lower and narrower than the previous Pilot.

Interior: The interior is as luxurious as anything from Detroit, with soft-touch surfaces everywhere. Three seating rows provide room for eight, with the front seats offering increased support for improved comfort. The driving position features commanding visibility, thoughtfully located controls and useful cubbies in front. The deep-bin console can hold an iPad and more.

The second row is a split-folding bench, while the third row is accessed (EX-L and above) via a button folding the second-row seat and sliding it forward. It offers two adults decent head and legroom — rare for this size three-row vehicle. 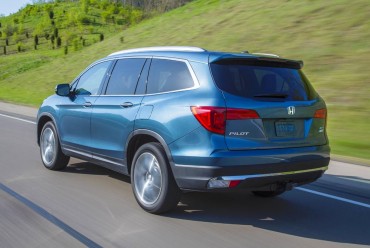 New for 2016 is a middle row with two seats and a pass-through. Each has its own tray table and cupholders, plus reclines for comfort.

Cargo space is abundant: with the third row folded, nearly 56 cubic feet, and 109 with both rows folded.

Behind the Wheel: The new Pilot delivers perhaps the most compliant steering and ride in this class. Handling is surefooted. Braking is strong.

Wow Factors: The engine has a surprisingly vigorous note when approaching redline. In Sport mode, the 280 horses married to the new 9-speed automatic deliver energetic acceleration.

Whines: Depending upon conditions, the 9-speed automatic sometimes hangs in gear a tad too long while the computer figures out exactly what to do.