Venerable Crossover SUV Gets a Facelift 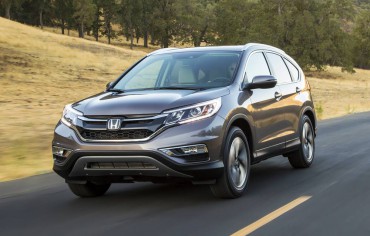 One of my favorite small crossover SUVs — the Honda CR-V — got a facelift for 2015. Five trim levels are offered with no options, and a new, top-of-the-line Touring model debuts.

The functional, compact crossover boasts room for five adults and lots of cargo. The suspension has been modified, with a wider track, and the body has been reinforced to preserve its top safety rating. Other changes include a revised dashboard and console. A camera previews your right flank with the turn signal engaged, while the new CR-V Touring model adds a power tailgate, 18-inch wheels and a suite of active safety assists, among other things. 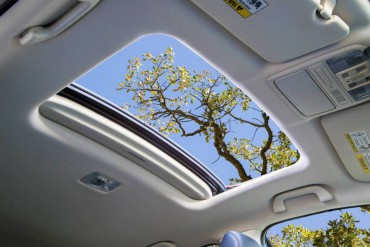 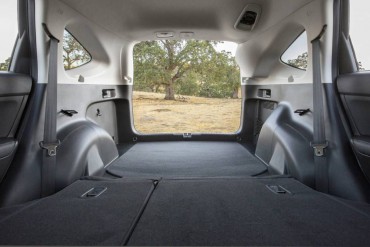 Walkaround: The 2015 CR-V features a new front fascia and a new rear design, with only new wheels and paint colors in between — so it still looks like a the Honda CR-V we all know. A narrow painted strip severs the front, while a contrasting color insert fills the lower center. The upper section has a new, muscular, split-bar design, adding an aggressive look to the face. The headlights vary by trim — midlevel and up use LED position lights, with the Touring getting HID low-beam projector headlights.

In the rear, the window-bottom black strip giving the illusion of tall glass is now a chrome swath that flows to the taillights. Rear-bumper sculpting and high reflectors give the CR-V a taller appearance — with more painted bodywork and less glass.

The profile-window line remains unchanged. The entire lower edge of the body — including the wheel openings — have dark plastic to repel rock chips, and the rear bumper panel drops forward from the tail lights to near the top of the rear wheelwells. The tailgate is low, and powered on the Touring model. 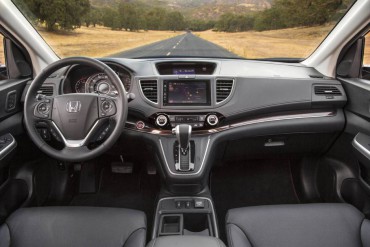 Interior: There’s no daring interior redesign but it’s simple, functional and pleasing to the eye. Most upper trim is soft-touch with nonindustrial-looking, hard plastic below. Most versions of the CR-V now feature smart entry and pushbutton start.

Instrumentation is slightly revised but gauges are still easy to read. The climate controls are logical in arrangement and function, with dual center-mounted screens that work individually — the top via steering-wheel controls with the lower being a touch-screen. They’re both easy to read, even with polarized sunglasses.

The center console gave up some storage space to air-conditioning vents for the rear seat but offers big cupholders, key and phone spots, with usable space under the armrest. While upper trims get leather upholstery, the armrests have sufficient padding and the cloth seats are temperature-resistant.

Small buttons on the nav system aren’t the only challenges. The audio system suffers the same small controls. The volume button is difficult to use when driving — inferior to a simple knob. Pressing it induces an onscreen adjustment just as bad. Muting the sound sometimes takes more than one attempt (can you say, “distracted driving?”).

Most interior dimensions are within an inch of the competition. Front seats are comfortable with adequate room, and with the rear seats folded or upright, the 35-cubic-foot cargo area equals the Rogue, is slightly less than RAV4 but bests the Equinox, Terrain, Escape and the larger Cherokee. Folding the rear seats is a one-tug maneuver that doesn’t require removing the headrests. The cargo area has tie-down rings and dedicated, out-of-the-way stowage for the cargo cover. 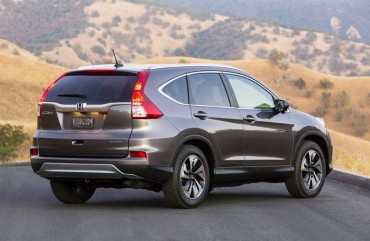 Under the Hood: The CR-V comes with a new, more sophisticated, 2.4-liter four-cylinder engine. It’s the same size but stronger and more efficient than the previous version, delivering the same 185 horses at lower revs. It’s married to a new, continuously variable transmission. The combination delivers near best in class fuel economy at 26/33 city-highway and combined EPA-rated 28 mpg. A driver-enabled eco-assist feature adjusts powertrain operation but still delivers full power when required. Both are new to CR-V but not to Honda.

Behind the Wheel: The CR-V isn’t about performance but has nothing to be ashamed of either. It offers good power and acceptable acceleration. The continuously variable transmission has no specific gears but varies the ratio as needed over a broad range, so the engine produces only the power needed. While it lacks the familiar immediate response of a traditional automatic, it has an improved fuel economy by 4 city miles per gallon, with less disparity between city and highway mileage.

With the wheels slightly wider and farther apart, the CR-V handles with more precision and still rides as quietly and comfortably as the 2014 model. It doesn’t lean much when pushed hard in corners, and the electric steering and electronic stability control work well together — even under heavy braking.

Whines: The audio quality is disappointing — even on the Touring model.

Bottom Line: The 2015 Honda CR-V — $33,600 as tested — is a capable, comfortable, safe, efficient compact crossover that seats five in comfort while carrying considerable cargo. Other crossovers may offer sportier handling or a third-row seat but few balance everything better.