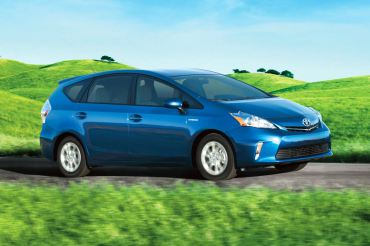 After 12 years and more than 3 million vehicles sold worldwide — half of them in the United States — the venerable Toyota Prius remains the most popular hybrid vehicle on the planet. Now in its third generation, the Prius first debuted in 2000 as a 2001 model. It was redesigned for 2010, and the plug-in version debuted as a 2012 model.

The 2014 Prius comes in four versions — Prius Two, Three, Four and Five — plus the plug-in model. The Three and Four offer the world’s first sliding-glass moonroof packaged with solar panels and located over the rear seating area, as an option. They power a ventilation system that helps reduce interior air temperature when the car is parked in the sun. The system allows remote operation, enabling the driver to lower the interior temperature before getting into the car. 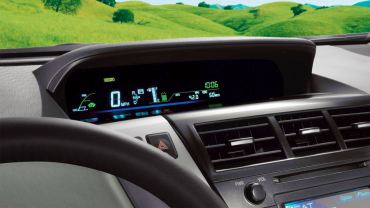 Walkaround: Not much has changed over the years. The tall, wedge-shaped Prius remains one of the most identifiable cars on the road, while its styling has evolved through subtle tweaks. Blue-tinted headlights are housed in wraparound trapezoids, while the optional LEDs consume 17 percent less battery power. The taillights are standard LED, reducing power draw by 88 percent.

The huge rear wiper is effective at keeping rain off the split-glass back window. The Prius Two and Three feature matte black trim around the windows, while the Four and Five sport a nicer, satin black finish. 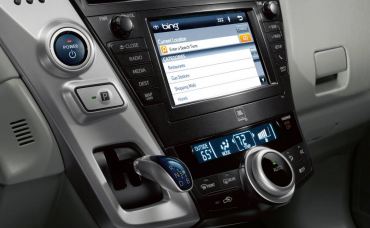 Interior: The Prius interior offers a nice, cozy feeling from behind the wheel. There’s a stylish, sloped, center console that runs from dashboard to between the seats, in a floating design that’s ergonomically friendly.

The adjustable front seats are roomy and comfortable. The trim is made of plant-derived resin, which, Toyota says, is highly recyclable. The Prius will seat five, but four make the ride more confortable.

The split 60/40 rear seats, which feature a folding center armrest between them with two cupholders, offer 36 inches of legroom. When dropped flat, there’s an impressive 39.6 cubic feet of cargo volume that’s easily accessible through the large rear liftgate. There’s also another 2 cubic feet of space in a tray under the floor of the cargo area for laptops and tools. The compact spare is positioned another level below that. 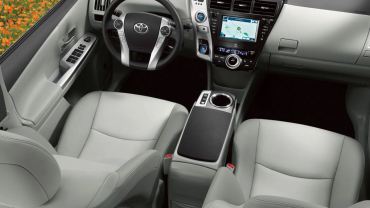 The four-spoke steering wheel offers buttons to work many of the car’s functions, including climate control and audio. The center-positioned digital instrumentation screen displays basic information along with graphs and images related to driving efficiency. There’s also an energy monitor that displays the battery charge in real time, viewable in several different modes.

Forward visibility is pretty good, even over the long dashboard, stretched by the steeply raked windshield, in spite of not being able to see the front corners of the car. Rear visibility is hindered somewhat by the bar that separates the two pieces of rear glass. 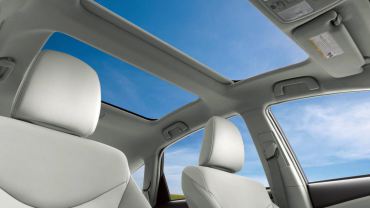 A full hybrid, the Prius can run strictly alone on the gas engine, the battery or a combination of both. The driver can select from four driving modes — normal, power, eco and EV. The EV mode allows driving on battery power alone at low speeds for about a mile, conditions permitting. 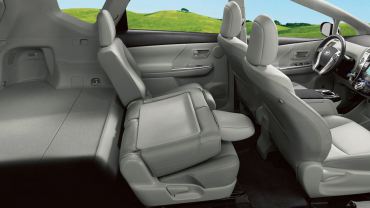 The 2014 Prius is certified as a Super Ultra Low Emission Vehicle (SULEV) and an Advanced Technology Partial Zero Emissions Vehicle (AT-PZEV) in California, and in states like Washington that have adopted California’s emission standards.

The Prius plug-in hybrid employs newly developed lithium ion (Li-ion) batteries and can be plugged in like an EV to extend its range. According to Toyota, the plug-in hybrid will allow true EV operation for up to 15 miles at speeds up to 62 mph. The plug-in hybrid comes with an easy-to-use external charging cable, but you’ll want a professional electrician to set up a dedicated fast-charger for quickest charge times.

Fuel economy is the No. 1 reason people buy the Prius. The Prius is EPA-rated at 51/48 mpg city/highway, with a combined rating of 50 mpg, and runs on regular. The plug-in hybrid is also rated 51/49 and 50 mpg combined. Because it also runs on electricity, the Environmental Protection Agency gives it a special rating of 95 miles per gallon equivalent (MPGe). 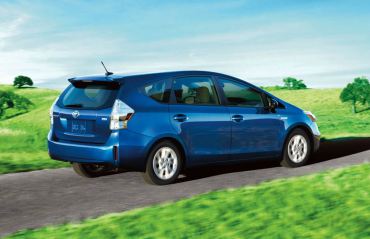 Behind the Wheel: While fuel economy is remarkable, acceleration can only be termed as leisurely — 0 to 60 in 9.8 seconds. However, the continuously variable transmission (CVT) is pretty smooth — something not prominent in all CVTs.

Handling is comfortable around town but on the road, if you drive aggressively, it corners heavy and slow. Ride quality is far from stellar and even with the 17-inch wheels on my Prius Five test vehicle, it could get pretty rough over marginal roads. The slower you drive, the better it is. I also experienced some road noise.

The four-wheel disc brakes are sensitive, possibly because of the regenerative braking system — the more you brake, the more battery power you build up, enabling you to use EV mode more.

Whines: In my view, the quality and finish of some interior materials don’t quite measure up for a car at this price point. The seat-heater button is inconveniently located on the floor under the console. The doors sound a little tinny when you shut them — as if sound-deadening material was left out as a concession to gas mileage.

Bottom Line: There are lots of reasons the Toyota Prius is the best-selling hybrid in the world. It’s practical, comfortable and highly efficient, with plenty of cargo space. But the design is getting dated and competitors are beginning to nip at its heels. Other hybrids like the new Ford C-Max — available as both a hybrid and a plug-in — and Chevy Volt have a fresher look and sharper driving dynamics. However, in my view, Toyota’s Hybrid Synergy Drive is still the best, most proven hybrid powerplant available — at least for now.